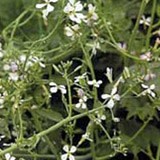 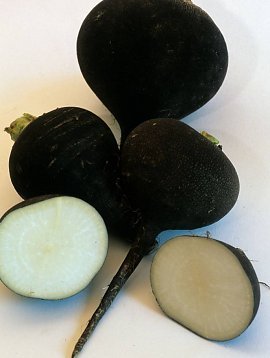 Folklore Info from A Modern Herbal, M. Grieve. Parts Used---Root, seed-pods. ---Habitat---Europe, especially Britain, and temperate Asia. A native of China, Cochin-China and Japan. Description---The name of this familiar garden plant is suggested by its colour, being derived from the Saxon, rude, rudo, or reod (ruddy), or from the Sanskrit rudhira, meaning blood. The genus is distinguished by its elongated pod, which has no longitudinal partition when ripe, but contains several seeds separated by a pithy substance filling the pod. The actual plant is unknown in a wild state, but is supposed to have come from Southern Asia, and may be descended from the wild Raphanus raphanistrum of the Mediterranean shores, the long roots developing seeds sown in a loose soil, and the turniprooted kinds in a stiff soil. In the days of the Pharaohs, the Radish was extensively cultivated in Egypt, but apparently it did not reach Britain until A.D. 1548. Gerard mentions four varieties as being recognized in 1597. The leaves are rough and partly divided into segments, the outer one being larger and broader than the rest. The flower stem grows to about 3 feet in height, bearing medium-sized flowers that vary in colour from white to pale violet, with stronglymarked, dark veins. Structurally, it resembles the turnip, as the swollen, fleshy portion is really a stem which gradually passes downwards into the real root. Many kinds are named, the best known being (1) turnip-rooted, both red and white, including the white and black Spanish kinds; (2) oliveshaped, including the white, scarlet, and French breakfast forms; (3) the long, tapering varieties, like Long Red and Lady's Finger. The flesh is white, crisp, and tender, not specially nourishing, but valued as an antiscorbutic because of its quantity of nitrous juice. When too large for eating raw, they can be steamed for half an hour and served like asparagus. They should be well washed, but never peeled except when preparing the juice for medicinal purposes; in dry weather the bed should be watered the day before they are pulled. The young, green, seed-pods may be used for pickling, alone or with other vegetables, and are considered a fair substitute for capers. Constituents---Phenyl-ethyl isothiocyanite, a pungent, volatile oil, and an amylclytic enzyme. Medicinal Action and Uses---Radishes are an excellent food remedy for stone, gravel and scorbutic conditions. The juice has been used in the treatment of cholelithiasis as an aid in preventing the formation of biliary calculi. The expressed juice of white or black Spanish radishes is given in increasing doses of from 1/2 to 2 cupfuls daily. The 2 cupfuls are continued for two or three weeks. then the dose is decreased until 1/2 cupful is taken three times a week for three or four more weeks. The treatment may be repeated by taking 1 cupful at the beginning, then 1/2 daily, and later, 1/2 every second day. The colouring matter is recommended as a sensitive indicator in alkalimetry. Other Species--- R. Raphanistrum (Wild Radish, or Jointedpodded Charlock). It was stated by Linnaeus that in wet seasons this abounds as a weed among barley, in Sweden, and being ground with the corn, it is eaten in barley bread, causing violent convulsive complaints, or an epidemic, spasmodic disease. Other authorities say that it is harmless, liked by domestic animals and bees. It is bristly, and has rather large, straw-coloured flowers. R. Sibiricus, or Siberian Radish, has cylindrical pods. R. caudatus, the Java, or Rat's Tail Radish, a native of Final, furnishes long, edible pods, purple or violet in colour. They should be used half-grown. The root of this species is not used. R. maritimus is an indigenous, seaside variety. R. Erucoides, of Italy, has pods with a beak of their own length, and a simple, biennial root, scarcely thicker than the stem. R. Tenellus, another native of Siberia, flowers in Britain in June and July, having awl-shaped, jointed, two-celled, smooth pods.