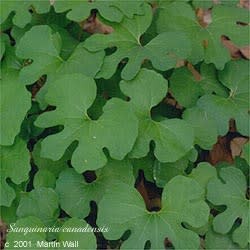 Warning: not for use internally or on the skin unless it is diluted to 10%. Not for use in those under 120#. Not to be used during pregnancy. May cause nausea and vomiting.

The genus name Sanguinaria derives from the Latin sanguis, "blood," and anguina, "snakelike." The species name, canadensis, refers to the plant's origin in northeastern North America.

Native to North America, bloodroot is an early spring wildflower found most often in moist, shady woodlands. The single, short-lived white flower appears before the plant's leaves and has seven to sixteen petals and a waxy consistency. The leaves at first are wrapped around the flower bud and then open into a palmate shape with deep grooves.

Bloodroot was widely used by Native Americans to treat, among other things, cancer, skin ailments, and snakebite. It was listed in the United States Pharmacopoeia from 1925 to 1965. The herb offers many benefits to gum tissues: it interferes with bacteria's ability to convert carbohydrates into a gum-eating acid, and it also blocks an enzyme that acts to destroy collagen in the gum tissue, thereby reducing plaque buildup. It is used in the treatment of arthritis, asthma, bronchitis, cancer, croup, fever, intestinal dryness, laryngitis, phlegm buildup, rheumatism, tuberculosis, tumors, vaginal dryness, and whooping cough. Topically, bloodroot can be made into a salve to treat cancer, eczema, fungal infection, nasal polyps, plaque buildup, ringworm, and warts. It is often included in toothpastes and mouthwashes for its ability to lessen tooth sensitivity and reduce plaque buildup and tooth decay. It also can be made into a gargle to relieve sore throat, a snuff to treat nasal polyps, or a wash (made with vinegar) to treat athlete's foot.

Not generally regarded as edible, aside from usage as tea.

When harvested, bloodroot exudes an orange-red sap that was traditionally used as a ceremonial body paint by Native Americans. A red dye is made from the rhizome.

Bloodroot is best used under the guidance of a qualified health-care practitioner. Use only very small doses internally, as large doses can cause vomiting, faintness, a burning sensation in the stomach, and temporary paralysis; excessive doses may be deadly. Avoid both topical and internal use during pregnancy, while nursing, and in cases of glaucoma. The fresh root is somewhat caustic and can cause skin irritation.