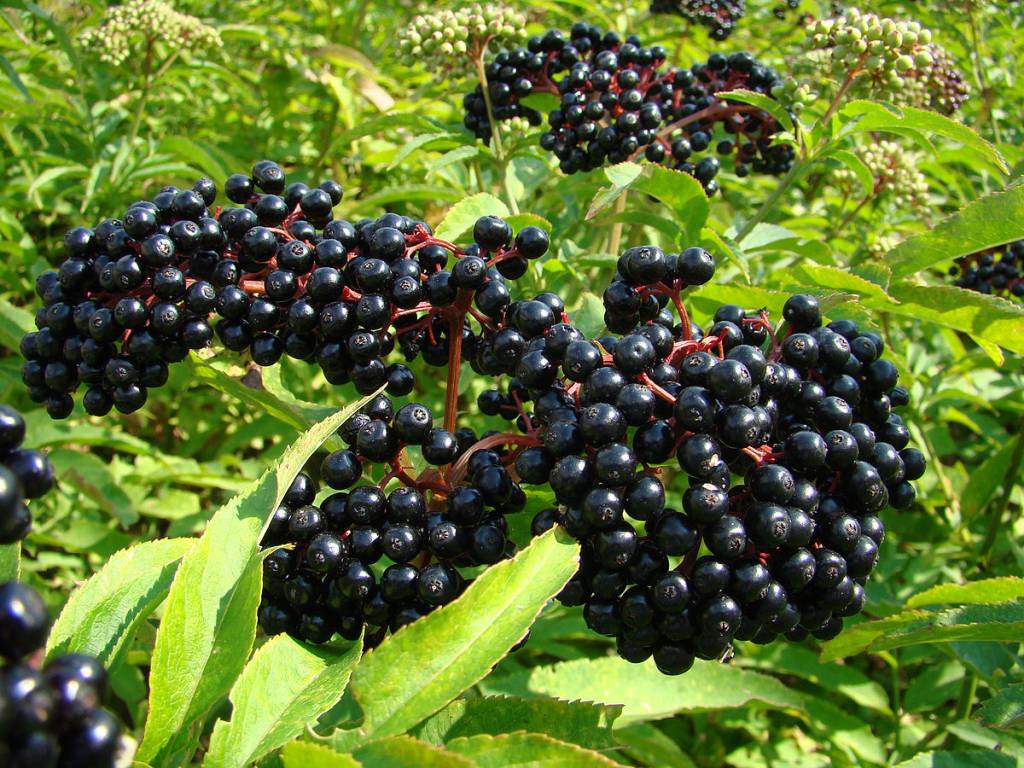 The genus name Sambucus is from the Greek sackbut, the name of a musical instrument made of elder. The species name nigra refers to the black berries of this species, and canadensis means "originating in Canada." The common name elder comes from the Anglo-Saxon aeld, "fire," in reference to the young hollow stems of this shrub having been used to blow into a fire to get it burning.

There are over 30 species of elder. Sambucus nigra is native to Europe, western Asia, and northern Africa, while S. canadensis is native to North and Central America. These small deciduous trees have soft wood and grow to a height of between 5 and 25 feet, depending on the species and climate. Elder grows in clumps, with ten to thirty canes (stems) together. The 23 leaves are divided into five to eleven slender glabrous leaflets, each about 3 1/2 inches long, that grow in opposite pairs, often with an extra leaf; they are shiny green above and duller light green beneath. The small white flowers form a flat-topped cluster. The berries are usually purplish black, although they sometimes appear to be blue, which is the result of a powdery blush upon them. They contain ovate greenish brown seeds. Many songbirds and wild animals, including moose and elk, depend upon elderberries for sustenance.

Elder flower and berry encourage the body to release toxins through their diaphoretic and diuretic action. They also dry dampness, relieve congestion, and help clear the heat of infection. The flavonoids in the berry help bind and disarm hemagglutinins, tiny viral spikes covered with the enzyme neuraminidase, which allows the virus to penetrate cellular membranes. Elderberry juice and syrup have been used for more than two thousand years in the treatment of colds, flu, and coughs. Elder flowers and berries prepared as a tea are used to remedy acne, asthma, boils, catarrh, chicken pox, chills, colds, colic, cough, eczema, eye twitches, fever, flu, gout, hayfever, headache, measles, neuralgia, respiratory infection, rheumatism, sore throat, and tonsillitis. Topically, elder flowers can be prepared as an anti-inflammatory wash, salve, eyewash, or gargle. A headache may be relieved by a cool elderflower compress.

The berries and flowers of elder are edible. Elderberries are both delicious and healthful; in fact, in the early 1900s hospitals served elderberry jam because of its high vitamin and mineral content and ability to improve appetite and digestion and promote regular elimination. Today elderberries are commonly used to make fruit soups, pies, cobblers, jams, ice cream, and syrups. When elder flowers are used in food, they are referred to as "elder blow." The flowers can simply be added to preparations such as fruit salads, jellies, vinegars, muffins, or punches. Try elderflower fritters with elderberry syrup!

Ancient Celts considered elder a sacred tree, symbolic of birth and death. In many ancient cultures elder was held to be so sacred that it was neither burned as firewood nor used in woodworking lest it bring bad luck to the household, and it was planted by homes and worn in amulets to encourage prosperity, happy marriage, healthy children, and protection from both lightning and evil forces. The leaves can be bruised and then rubbed on the body or worn in a hat to keep away pestering insects. A tea prepared from the leaves, cooled and strained, can be applied to other plants to prevent aphid infestation. Elder flowers are sometimes used in cosmetic preparations such as skin washes, toners, lotions, and hair rinses. The berries were once used in hair dye to rejuvenate fading color.

Avoid elder in cases of fluid depletion, as elder is a diuretic. Cook or dry the ripe berries before consuming large quantities of them, as excess quantities of the fresh berries can have a laxative effect. Avoid elder bark and root, except under the guidance of a qualified health-care practitioner; although they have medicinal benefits, they are strongly purgative and emetic. Know your species and avoid using redberried elders, as many of them are poisonous.