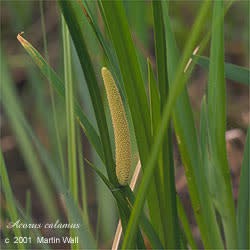 The genus name Acorus derives from the Greek coreon, meaning "pupil of the eyes," as calamus was once used to treat eye problems. The species and common name calamus derives from the Greek calamos, meaning "reed canes." The common name Singer's Root references the fact that singers once used calamus to numb and clear phlegm from the throat, allowing them to sing for extended periods.

Calamus helps dry dampness, expel phlegm, and curb infection. It has an antihistamine-like effect on hay fever and colds. Small amounts reduce stomach acidity, while larger doses can increase gastric secretions. During the Crimean War calamus was recommended to soldiers as a treatment for malaria, as quinine was in short supply. Today, calamus is used in the treatment of anorexia, appetite loss, arthritis, asthma, bronchitis, catarrh, colic, cough, diarrhea, dysentery, dyspepsia, epilepsy, fatigue, fever, flatulence, gastritis, headache, heartburn, hypochondria, hysteria, laryngitis, memory loss, mental illness, rheumatism, sinusitis, and speech problems. It also aids in recovery from stroke and detoxification from anesthetics. Small amounts of the root are given to children in Ayurvedic medicine to enhance their intelligence and to adults in Oriental medicine to "calm the spirit." Topically, powdered calamus can be used as a snuff to relieve nasal congestion (this may cause sneezing, which will open respiratory passages), as a deodorant for feet, or as an antiseptic healing agent for wounds. In Ayurvedic medicine calamus root is prepared as a douche or enema to deter fungal overgrowth. The root also can be used in the bath or as a compress to relieve back pain and headache. It can be smoked to deter tobacco cravings and to mitigate the negative effects of smoking cannabis. It also can be chewed to relieve teething pain. A tincture of the root can be applied topically to eliminate skin parasites. Diluted calamus essential oil is used in massage oils to treat paralysis and rheumatism.

The rhizome is edible; it and the leaf can be candied and used as breath fresheners. Calamus leaf buds and inner stems can be eaten raw. The leaves have been used to flavor milk in making puddings and custards. And in India calamus ghee (clarified butter) is used as a therapeutic condiment.

Calamus has been used as a strewing herb and in incense and sachets for its pleasant aroma, and the essential oil has been used to flavor pipe tobacco. Mongolians planted calamus near watering holes to purify the water for horses. Native Americans were known to hold a piece of calamus root in their mouths when running long distances to increase their endurance. In large amounts the root has psychoactive effects; the poet Walt Whitman wrote many poems while under its influence.

Calamus contains beta-asarone, which when isolated may be carcinogenic. However, calamus has been used in India for thousands of years with no reports of cancer being attributed to its use. North American varieties do not contain beta-asarone and are considered safest. Use calamus for no longer than a month at a stretch, and preferably under the guidance of a qualified health-care professional. Avoid during pregnancy.