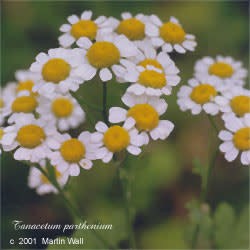 Preparations & Dosage: Infuse by pouring 1 c of boiling water over 1 Tbsp of dry herb. Let steep for 10-20 mins, strain, and drink 1-2 c a day. One may also steep the dry herb overnight. Consistent consumption of feverfew over a period of 3 mths has shown efficacy for prevention of migraine headaches. 10-40 drops of a 1:1 liquid extract may be taken 1-4 x's per day.

Feverfew is a perennial native to southeastern Europe. The plant reaches a height of 6 to 18 inches. The leaves are strongly scented, feathery, greenish yellow, and bipinnate. The flowers are daisylike, with white petals and yellow centers.

Feverfew prevents blood platelet aggregation and inhibits the release of inflammatory substances from cells, including leukotriene and thromboxane prostaglandins. It also inhibits the release of histamine and serotonin. It is used in the treatment of allergies, amenorrhea, arthritis, colds, dysmenorrhea, fever, flu, headache, indigestion, migraine, pain, placenta retention, rheumatism, stomachache, toothache, and worms. It may take several weeks to get results from using feverfew. Eating a few leaves every day can help prevent migraines. Topically, feverfew can be applied as a compress to the head to relieve headache, to the gums to reduce swelling after a tooth extraction, or to bruises to facilitate healing. It also can be used in a sitz bath to relieve menstrual cramps or in an enema to get rid of worms. The fresh flowers can be rubbed onto the skin to soothe insect bites.

Feverfew is edible, though it is not generally considered a food source. It has been used to flavor pastries and wine.

The flowers deter bugs and moths and are sometimes added to sachets kept with clothing. They also can be rubbed fresh onto the skin as an insect repellent. The essential oil is used in perfumery.

Avoid during pregnancy and while nursing. Because it can diminish blood-clotting ability, feverfew should not be used in conjunction with blood-thinning medications and should be avoided for at least a week prior to surgery. In rare cases feverfew can cause irritation of the gastrointestinal tract, mouth, or tongue; taking it with food can minimize this possibility. In cases of severe allergy to ragweed, a close relative of feverfew, use feverfew under the guidance of a qualified health-care practitioner. In rare cases topical use of feverfew can cause contact dermatitis.