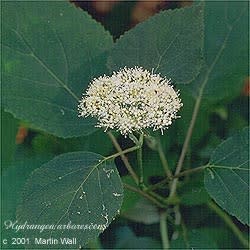 The genus name Hydrangea derives from the Greek hydro, "water," and angeion, "vessel." The common name seven barks refers to the fact that when the bark peels off, it does so in several layers of various colors.

Hydrangea is a Native American decidious shrub that can grow 5 to 10 feet tall. It grows in the wild along streams, hills, and woodlands and is a popular ornamental. The leaves are opposite, mostly ovate, pointed, and toothed. The numerous, small, beautiful flowers are borne on cymes and are usually white but sometimes pink or purple, depending on soil alkalinity. Most hydrangeas do best in rich, moist soil and prefer full sun, though they will tolerate partial shade.

Hydrangea was used widely by the Cherokee Indians and, later, European settlers to treat stones in the urinary tract. It is known to help remove uric acid accumulations from the body, cleanse the kidneys, and soften deposits. It aids in the passage of stones and helps prevent their reoccurrence. It also deters infection, soothes inflammation, and strengthens the capillaries. Hydrangea is used in the treatment of arteriosclerosis, arthritis, bladder stones, backache due to kidney problems, capillary fragility, cystitis, dropsy, dysuria, gout, kidney stones, nephritis, prostatitis, urethritis, and urinary tract infection. Topically, hydrangea can be used as a compress or poultice to treat burns, sprains, tumors, and wounds.

The roots and rhizomes are not generally considered edible. The young shoots and leaves, however, are edible after being cooked.

Excessive amounts can cause gastrointestinal distress, dizziness, and chest congestion. Hydrangea is not recommended for long-term use or during pregnancy. Use just the root or rhizome; there have been some reports of the flowers and leaves causing toxicity in humans.