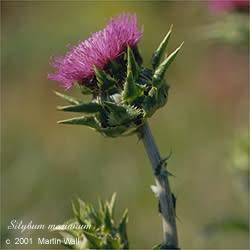 The genus name Silybum was given by the first-century Greek physician Dioscorides as a name to several edible thistles. The species name, marianum, honors the Virgin Mary. The common name milk thistle refers to the white veins on the leaves, which look as if milk was spilled upon them, according to legend, the milk of the Virgin Mary.

Native to the Mediterranean region but naturalized throughout North America, milk thistle thrives on dry, rocky ground with full sun. The plant has shiny pale green leaves that are prickly at their outside edges and marked with "milky" white veins that run throughout the leaves. The flowers are red to purple.

Milk thistle seed has long been used medicinally; Dioscorides, who named the genus, wrote that milk thistle seed could be used to treat snakebite. Milk thistle seed helps protect the liver, prevents toxins from penetrating the interior of liver cells, promotes the growth of healthy liver cells, and improves the liver's function. It offers excellent support for the liver for those who need to take pharmaceutical drugs. After consumption of poisonous mushrooms such as death cap (Amanita phalloides) or exposure to carbon tetrachloride, which destroy liver cells and usually cause death, if intravenous applications of milk thistle seed compounds are given within 48 hours, the survival rate is almost 100 percent. Milk thistle seed has also been shown to stimulate and quicken liver regeneration in animals who have had partial hepatectomies. It also helps lower cholesterol levels and can help inhibit the growth of cancer cells in the breasts, cervix, and prostate. Milk thistle seed is used in the treatment of alcohol abuse, bile duct inflammation, chemical exposure, chemotherapy side effects, cirrhosis, depression, drug abuse, environmental illness, hepatitis, high cholesterol, jaundice, liver damage, poisoning, and psoriasis.

The seeds are edible; they are usually ground before being sprinkled onto culinary preparations. They can also be roasted and used as a coffee substitute, and an edible oil can be pressed from them. Milk thistle leaves, with their spines removed, can be eaten as greens and are best when young and tender. The young stalks were once cultivated as a vegetable; they can be eaten raw or cooked and are considered superior to cabbage. The flower buds, though small, yield a heart like an artichoke that can be eaten. The roots of the plant can be consumed raw, boiled, or steamed.

There have been occasional reports of the seeds causing bloating or diarrhea or having a laxative effect.