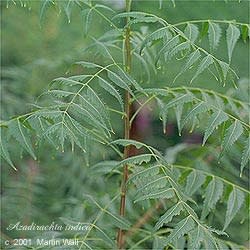 The genus name Asadirachta derives from the ancient Sanskrit arishta, "health bestower." The species name indica indicates that the plant is native to India. The common name neem derives from the Sanskrit name for the plant, nimba.

Native to the Indian subcontinent and now widely grown in tropics around the world, neem is a fast growing evergreen tree that reaches a height of about 25 feet. It can tolerate poor soil, extreme heat (but not cold), and drought, but in times of drought it will shed most of its leaves. The leaves are alternate and pinnate; they are reddish brown when young, becoming dark green when mature. The tree bears small, sweet-scented white flowers that bloom in drooping panicles. The olive-shaped fruit has a bitter, yellowish pulp in which one to three seeds are found.

Neem is one of the most appreciated trees in the Indian culture. Hindu legend says that when sacred nectar was being flown from earth to the heavens for the use of the gods, a few drops of nectar fell on the neem tree, which bestowed upon it its numerous healing virtues. The Hindu goddess Kali is said to dwell in the tree. Neem improves circulation and combats a wide range of pathogens. The leaves are used in the treatment of arrhythmia, arthritis, cancer, convalesence, cough, diabetes, digestive disorders, eczema, fever, high cholesterol, jaundice, malaria, nausea, obesity, parasites, rheumatism, smallpox, syphillis, tumors, ulcers, and worms. Neem leaf can be used as a bath herb to treat chicken pox, rash, and wounds or as a salve, lotion, or soap to treat acne, athlete's foot, and ringworm. The juice from the leaves can be applied topically to treat boils and eczema. Neem oil, extracted from the leaves and seeds, has strong insectidical and antiseptic properties and can be used to get rid of lice and scabies and to repel mosquitoes and other pests. The seed is very moisturizing and is often used in medicinal soaps to treat skin ailments. The bark is often used topically to heal skin infections, gum disease, and dental problems; a decoction of the bark can be applied topically to treat hemorrhoids.

Neem oil is used as a pesticide and fungicide that kills bacteria and over 200 types of insects and fungi but is harmless to honeybees and vertebrates. The leaves can be placed in grain bins, beds, books, cupboards, suitcases, and closets to repel bugs. The dried plant can be burned as a fumigating incense. In cosmetics neem acts a preservative, as well as benefiting many skin conditions. The seeds of neem are being investigated as a possible male and female contraceptive. Neem wood is used in woodworking. A gum that exudes from the bark is used to dye silk.

Neem should not be given to infants, the elderly, or the infirm. In healthy adults neem is considered safe; however, long-term internal use may result in anemia, weakness, appetite loss, and weight loss.