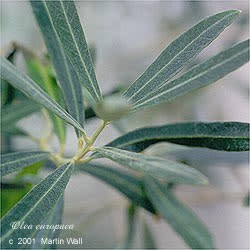 The genus name Oleum is Latin for "oil." The species name europaea denotes the plant's European origin. The common name olive derives from the Greek name for the tree, elaia.

Oleuropein, a phenolic compound found in the leaf and fruit (and also in the roots and bark), protects not only the tree but also, when ingested, the human body. The effect of this compound in dissolving the outer lining of pathogenic microbes is so potent that it must be removed before olive fruits can be fermented or the process will be inhibited. The leaf increases the number and activity of phagocytes and interferes with viral infection by inactivating the virus, preventing the virus from shedding its coat, budding, or assembling at the cell membrane. It can also directly penetrate an infected host and inhibit viral replication. The leaf relaxes and dilates peripheral blood vessels and protects the body against hardening of the arteries. It is reported to kill off many pathogens including cryptosporidia, giardia, pinworm, malaria protozoa, roundworm, and tapeworm. It also helps lower blood sugar levels and helps the body better eliminate uric acid. The leaf can be used in the treatment of AIDS, anthrax, botulism, bronchitis, candida, chicken pox, chlamydia, cholera, chronic fatigue syndrome, colds, cystitis, diabetes, dysentery, edema, Epstein-Barr virus, fever, fibromyalgia, flu, gonorrhea, heartbeat irregularities, hepatitis, herpes, HIV, hypertension, leprosy, Lyme disease, malaria, measles, mumps, New Castle disease, parasites, pinworm, pneumonia, polio, psoriasis, rheumatoid arthritis, shingles, sinusitis, small pox, staph infection, syphilis, tuberculosis, typhoid, tumors, ulcer, whooping cough, and yellow fever. Olive oil reduces levels of digestive acids, increases bile secretions, soothes mucous membranes, and relieves congestion in the lymph system and lungs. It helps dissolve cholesterol deposits, lowers levels of low-density lipoproteins (LDL, or "bad" cholesterol), and increases blood flow. It can be used to help prevent heart disease and in the treatment of gallstones, gout, and ulcers. Topically, the leaf can be prepared as a wash, compress, or poultice to treat athlete's foot, crabs, lice, scabies, ringworm, and wounds. It also can be prepared as a douche to treat yeast infection or nose drops to treat respiratory infection. Olive oil can be used topically to treat burns, cradle cap, dry skin, inflammation, and wounds. The oil is also included in enemas to treat constipation and in ear drops to treat earaches and infection.

Olive leaf is not generally considered edible, but the olive oil most certainly is. The oil is very nutritive. Extra-virgin olive oil is considered the highest quality, being of the first pressing of the fruits. Virgin olive oil comes from the second pressing. Subsequent pressings of the olive pulp and seeds use solvents and high heat, and the resulting oil is marketed as "pure" olive oil. However, this oil may contain traces of the solvents used in the pressing, and because it has been exposed to high temperatures, the oil may not be of the best flavor. In general, olive oil should not be heated to a high temperature, or its flavor will deteriorate. The olives themselves are also edible. Raw, unripe olives are extremely bitter. They are often cured in lye, salt, or vinegar before being eaten.

Olive has been a symbol of peace since ancient times; the olive branch is still used as a symbol of peace for the United Nations. Olive oil has long been used in oil lamps. It is often included in cosmetic creams and lotions for its emollient properties. It is often used as a carrier for essential oils that need to be diluted before being applied, and it is considered a nutritive even when applied topically. Olive wood is esteemed in woodworking.

Olive leaf and oil are generally regarded as safe. Pathogen die-offs have been reported from olive leaf use, in which the body experiences aches, sore throat, or flulike symptoms as a result of the die-off of pathogens. Some may find olive leaf tea irritating to the stomach; consuming it soon before or after a meal will reduce this effect.