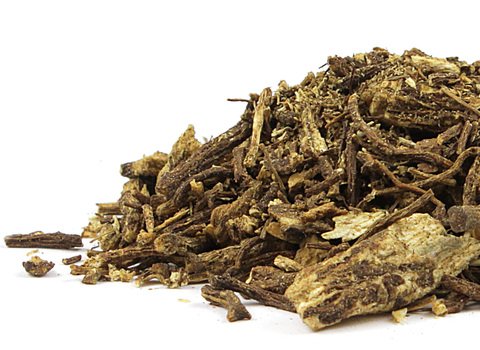 Make a decoction using 1 heaping teaspoon per cup of boiling water. Simmer 15 minutes on low. Strain. Dose: 1 cup of decoction, 2 times per day. Roots may be re-used 3-4 times until the decoction loses its flavor.

The genus name Ligusticum was given in honor of the Italian region Liguria.

Osha is a hairless perennial with hollow stems that can grow to a height of 5 feet. The pinnately divided leaves are primarily basal, with several smaller leaves clasping the stalk. The hermaphroditic white flowers grow in flat umbels. The seeds have narrow wings. The plant's aroma is distinctly like that of pungent celery. L. porteri is native to eastern and western North America; it is often found growing among damp aspen lodgepole pine groves over 7,500 feet in altitude. Other species are native to Eurasia. If you are collecting Osha from the wild, take care not to confuse it with poison Hemlock, which it resembles. Osha has not been cultivated on a large scale successfully, and wild populations are at risk of becoming endangered, so use it with respect.

Osha leaves and root are edible and have a spicy, celery-like flavor. Apache Indians traditionally boil the root with meat.

Osha was considered to be a sacred plant by many Native American peoples. Traditionally it is worn in a medicine pouch and around the ankle to ward off rattlesnakes. Flathead Indians would wash the roots in a mountain stream near where they had grown to help bring rain. The root can also be burned as incense for purification, and it has been used to increase psychic ability and enhance dreaming. It is also sometimes smoked with tobacco and other herbs in some Native American religious ceremonies.