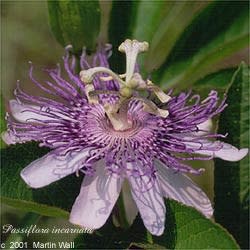 The common name passionflower refers not to any ability of this plant to incite passion but rather to the passion of Christ. According to Jesuit missionaries who found this beautiful plant growing in South America, the blue and white color of the flower symbolizes heaven's purity. The ten white petals symbolize the ten faithful apostles (minus Peter and Judas). The filaments of the corona correlate to the crown of thorns, the five red stamens are representative of the five wounds, and the three styles of the pistils are three nails. The tendril represent the whips used on Jesus, and the pointed leaves, the spear. When the flower is only partially opened, it looks like the star seen by the Wise Men.

Passionflower was an official herb of the U.S. National Formulary from 1916 to 1936. It is an aid for those who overwork, being both invigorating and soothing. It aids concentration; calms the spirit, central nervous system, liver, and heart; relaxes the nerves; slightly lowers blood pressure; increases the respiratory rate; helps slow down the breakdown of neurotransmitters; and induces rest. It aids sleep without leaving one feeling hung over the next morning, and, of course, it is not addictive. Passionflower tea is used to treat alcoholism, anger, anxiety, asthmatic spasms, bronchitis, colic, cough, convulsions, diarrhea, depression, epilepsy, headache (due to stress), high blood pressure, hyperactivity, hysteria, insomnia, irritable bowel syndrome, irritability, menstrual cramps, migraine, muscle tension, neuralgia, nervous breakdown, pain, Parkinson's disease, PMS, restlessness, seizures, shingles, spasms, stress, tachycardia, tranquilizer addiction, whooping cough, and worry. Topically, passionflower can be used as a compress to treat boils, bruises, burns, earache, eye inflammation or irritation, skin irritation, and toothache.

The leaves and roots of some species have been used to increase the potency of consciousness-expanding substances such as ayahuasca. Like most foods, passion fruit has some physiologically therapeutic benefits, in this case being antiscorbutic, diuretic, and nutritive. When included in the diet, it can help get rid of a urinary tract infection, calm hyperactivity, and relax coughs. It is also considered to be a heart tonic.

The flower, leaf, and vine are not generally considered edible. However, the fruit of P. edulis, known as passion fruit, has been a staple food for peoples of its native range for thousands of years. And a sedative chewing gum made with passionflower was patented in Romania in 1978.

Large doses may cause nausea and vomiting. Avoid large doses during pregnancy. Unripe fruits have some level of toxicity and should not be consumed.