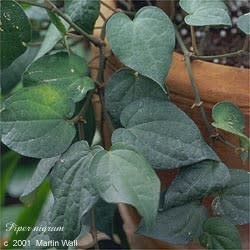 The common name pepper and genus name Piper derive from the Greek word for the plant, peperi, which in turn derives from the Sanskrit pippali, a name for long pepper. Nigra, the species name, is Latin for "black."

Black pepper is a perennial vine native to southern India. The leaves are thick, green, and ovate in shape. The species is dioecious, bearing male and female flowers on different plants; the flowers are tiny and white. The berrylike, aromatic, pungent fruits are borne on short, hanging spikes. They are green when unripe and become red at maturity. Black pepper grows in almost all types of soil but prefers soils that are loose and well-drained, in a humid climate with much rainfall and partial shade.

Pepper warms the body, improves circulation, and prevents the proliferation of pathogens. It is believed that eating lots of pepper will make one less desirable to mosquitoes. When pepper is added to food in moderation, it stimulates the production of both saliva and digestive secretions, including hydrochloric acid. Pepper is used in the treatment of arthritis, colic, diarrhea, flatulence, headache, indigestion, nausea, poor circulation, rheumatism, stomachache, and vertigo. In eastern Africa, pepper is sometimes used as an abortifacient, for which purpose it is consumed in excess quantities. Topically, pepper can be prepared as a wash to deter ringworm and lice.

Pepper has been considered a precious spice since ancient times. Attila the Hun is said to have demanded a ransom of three thousand pounds of pepper during his siege of Rome in the year 408. Pepper was an important early trade item, and the quest for this spice prompted much world exploration; Columbus, in fact, was hoping to find pepper in the East Indies when he bumped into North America. Currently pepper accounts for more than one-fourth of the world's spice trade. Commercial black, green, and white peppers are all from the same plant, Piper nigrum. Black pepper is the unripe but fully grown berry. White pepper, a milder version, is the mature fruit that has been soaked and peeled. Green pepper is the young, unripe fruit.

Pepper essential oil is used in perfumery and is added to massage oils for its stimulating and toning properties. Pepper can be prepared as a spray to repel ants, boll weevils, flies, roaches, moths, and silverfish. In folklore tradition, pepper is reputed to repel negative energy.

Overuse may cause oversecretion of digestive juices, leading to a burning sensation in the digestive tract. Large amounts may elevate blood pressure.