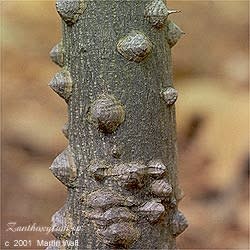 The genus name Zanthoxylum is derived from the Greek zanthos and xylum, "yellow wood."

Prickly ash is a shrub native to North America. It requires a well-drained, alkaline soil, moderate moisture, and full sun to partial shade. Z. americanum grows to 10 to 12 feet in height, with alternate branches that have conical paired prickles. The leaves are alternate and pinnate, with five paired leaflets and one odd one; they have a lemonlike aroma when crushed. The greenish yellow flowers appear before the leaves and grow in small dense clusters. The reddish green berries are covered with lemon-scented dots. Z. clava-herculis grow to 40 feet in height. Its bark bears prickles that look like triangular knobs, and the branches have even larger knobs. The greenish flowers also appear before the leaves.

Prickly ash bark was included in the United States Pharmacopoeia from 1820 to 1926 as a rheumatism remedy; it was used with success to treat the 1849 to 1850 outbreak of Asian cholera in the Midwest. Prickly ash bark generates warmth, improves circulation, breaks up congestion, relieves pain, and restrains infection. It prevents blood platelet aggregation and has a stimulating effect upon the entire body, including the lymphatic system and mucous membranes. In fact, it is as strong a stimulant as cayenne pepper but is slower acting and longer lasting. Prickly ash bark is used to treat arthritis, cancer, candida, chilblains, chills, cholera, colds, cough, diarrhea, dyspepsia, dysentery, exhaustion, fever, flatulence, gout, lethargy, lumbago, paralysis (including of the mouth and tongue), Raynaud's disease, rheumatism, sickle cell anemia pain, sore throat, tuberculosis, typhoid, typhus, varicose veins, and venereal disease. The berries promote the dispersal of congestion and are used to treat asthma, diarrhea, paralysis, poor circulation, sore throat, and tonsillitis. Prickly ash was widely used by Native American peoples as a topical remedy to relieve rheumatism and toothache. The bark can be chewed as an herbal toothbrush or prepared as a mouthwash to prevent tooth decay. It also can be prepared as a poultice to treat back pain, pelvic inflammatory disease, rheumatism, toothache, and wounds or as a lotion to improve circulation.

The bark and berries are not generally considered edible. The seeds, however, can be cooked and eaten. In Asian cooking, the berries of a related species, Zanthoxylum piperitum, are roasted and called Schezwan or Chinese peppers; they are an ingredient in Chinese five-spice powder.

The fruits can be made into an orange-scented perfume for men that is said to attract love.

Avoid during pregnancy, in cases of stomach or intestinal inflammation, or in conjunction with blood thinning or blood pressure medications. Prickly ash can produce a hot, tingling sensation in the mouth and throughout the body that is not cause for alarm.