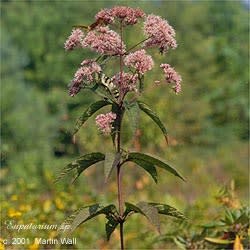 The genus name Eupatorium honors an ancient Persian king, Mithrades Eupator, who was a renowned herbalist. The common name gravel root refers to the plant's long history of use in helping the body rid itself of stones. The common names joe-pye weed and jopi weed derive from that of Joe Pye (or Jopi), who, according to folklore, was a Native American medicine man in New England who used the plant to treat typhus. The common name queen of the meadow is a reference to the plant's beautiful and stately purple or pink flowers.

Gravel root is a perennial native to the meadows, woodlands, and lowlands of Europe and eastern North America. It usually reaches a height of about 6 feet but on occasion 12 feet. The stems are green, with a purplish hue at the leaf nodes. The leaves are broad, rough, and jagged and grow three to five at a joint. The hermaphroditic flowers are tubular and white or pale pink to purple and grow in rounded clusters.