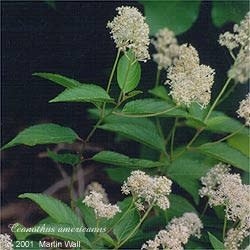 THERE IS A RATION OF THIS ITEM OF NO MORE THAN 4 OZ PER CUSTOMER AT THIS TIME. THANK YOU

Red root is a shrub also known as wild snowball for its clusters of white flowers borne in early summer. Its root is bitter and its root tea has a "bite." Red root was used as a substitute for tea during the American Revolutionary War.

The genus name Ceanothus derives from the Greek keanthos, "spiny plant." The species name americanus refers to the plant being native to North America. The common name redroot refers to the red dye that the root yields.

Redroot is a small deciduous shrub native to eastern and central North America. It grows in dry woodland areas in well-drained soil and full sun to partial shade. Its reddish root is covered with a reddish or brownish bark and can reach up to 4 feet in length. The leaves are ovate or obovate, finely serrated, and dull green on top, with fine hairs on the bottom. The hermaphroditic flowers are small and white and occur in long, stalked clusters at the ends of the branches.

It is excellent for encouraging the body to get rid of catabolic waste buildup and to break up tumors and engorgements in the body. It also appears to improve blood coagulation. It is used in the treatment of asthma, bronchitis, catarrh, coughs, cysts, diarrhea, dysentery, fever, hemorrhoids, Hodgkin's disease, hypertension, lymphatic congestion, menorrhagia, nosebleed, Rocky Mountain spotted fever, sore throat, spleen enlargement, syphilis, tonsillitis, tuberculosis, tumors, ulcers (bleeding), and whooping cough. Several Native American tribes traditionally use redroot as a poultice to treat skin cancers and lesions caused by venereal disease. It is also effective as a mouthwash and gargle to treat oral infections such as sore throat and tonsillitis.

The root yields a reddish dye, while the flowers yield a blue or green dye. All parts of the plant contain high levels of saponins; the flowers contain enough to be used to make soap. Redroot also fixes nitrogen and can be planted as a green manure.

Redroot is considered very safe. It is mild enough to be used for extended periods of time.