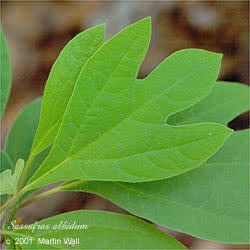 The origin of the name sassafras is hazy. It is thought to have been given by Nicolas Monardes, a sixteenth-century Spanish botanist, as a corruption of saxifraga, the name of another genus of plants; there may have been an American Indian name for sassafras that sounded like saxafraga and contributed to the alteration. The species name albidum derives from the Latin alba, "white."

Sassafras, native to eastern North America, usually grows as a small deciduous shrub, though it can reach a height of 100 feet. It has a dark brown bark. Small, fragrant, greenish yellow flowers appear in clusters before the leaves. The leaves are alternate, bright green on top and downy below, and from 4 to 6 inches long; they are often three lobed and mitten shaped. A small blue-black oval fruit, containing one seed the size of a pea, is widely eaten by birds. The root is a lovely orangish brown. The plant has a spicy orange-vanilla fragrance. Sassafras thrives in deciduous woodlands with moist, well-drained soil and partial shade.

Sassafras was one of the first exports from the United States to England. Many early American colonies were situated close to sassafras groves, as it was such a marketable crop. It was included in the United States Pharmacopoeia from 1820 to 1926. In Appalachian and Ozark folk medicine, sassafras is considered an essential part of a springtime tonic. It improves circulation, deters infection, destroys pathogenic microorganisms, and causes the release of toxins through diaphoresis. Sassafras is used in the treatment of acne, arthritis, boils, carbuncles, catarrh, colds, diarrhea, dysentery, eczema, fever, flatulence, flu, gonorrhea, gout, herpes, hypertension, measles, nephritis, psoriasis, rheumatism, scrofula, shingles, skin eruptions, stomachache, and syphilis. Topically, sassafras can be prepared as a poultice to relieve inflamed eyes or as a liniment to treat bruises, rheumatism, sciatica, sore muscles, and swellings. It also can be made into a wash to treat poison ivy/oak or nettle rash. The essential oil can be diluted and applied directly to relieve toothache or to get rid of head lice and other surface parasites.

Sassafras tea has long been a popular beverage; during the Civil War, when black tea imports were cut off, sassafras was among the most popular replacements. Its most famous use is as a flavoring for root beer. It also can be used to improve the flavor of other teas and medicines. The winter buds, young leaf tips, and flowers can be eaten raw or cooked. The leaves are flavorful and have a thickening effect. Dried and powdered, they are used in Cajun cooking and to make the Cajun spice blend gumbo file.

The essential oil of the root bark is sometimes added as an aromatic or flavoring agent to soaps, toothpastes, mouthwashes, gums, beers, and perfumes.

In the 1960s there arose some controversy about one of sassafras's components, safrole, which was shown to cause liver cancer in rats. The studies were done with large amounts of isolated safrole, not with sassafras bark as a whole. However, later studies found that the cause of the cancer was not safrole itself but liver enzymes acting on it, and in human studies it did not have the same effect. Interestingly enough, Cherokees used sassafras as a remedy for liver cancer. Nevertheless, there are safrole-free sassafras items available. Keep in mind that the safrole in sassafras is considered to be one-fourteenth as carcinogenic as the ethanol in beer. And safrole occurs naturally in many other common spices, such as basil, bay leaf, black pepper, cinnamon, nutmeg, mace, star anise, and sage. Large doses of sassafras may have a narcotic effect. (In fact, MDMA, or Ecstasy, was originally synthesized from sassafras.) Use only occasionally and in moderate doses. Sassafras is not recommended during pregnancy. As it decreases lactation, nursing mothers should avoid it (unless drying up their milk supply is their purpose).