Herbs to be avoided during pregnancy: The following information comes from the American College of Nurse Midwives monograph, “Herbology throughout the reproductive cycle”.

There are many wonderful healing plants, which should be avoided during pregnancy for a variety of reasons. Some irritate the placenta, some can cause mutation of the developing fetus and others stimulate muscular contractions of the uterus. It is best to consult a qualified herbalist before using any herbs other than for nutritional support during pregnancy.

There are approximately 560 plants which have the ability to cause miscarriage or defects during pregnancy. Only about 50 of these plants are commonly used in the U.S. today. These can be broken down into groups of plants by their actions:

Some of these herbs may be safe when used by skilled practitioner in appropriate doses and some may be used in late pregnancy to help prepare for birth. Make sure you know what you’re doing before using any supplements during pregnancy! wild carrot seed, chaparral, goldenseal, dong quai, feverfew, angelica, motherswort, ginger, any laxative herb including cascara sagrada, buckthorn, senna, osha’, rhubarb, bloodroot, poke, cascara sagrada, cotton root bark, rue, thuja, calamus, wormwood, rhubarb, senna, and lobelia.

The following herbs may be used under a trained midwife’s or physician’s recommendation only during the last 2-3 weeks of pregnancy: blue cohosh, black cohosh, blue vervain, spikenard.

Note: caution should be taken when using ginko with blood thinners 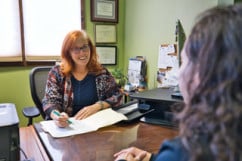