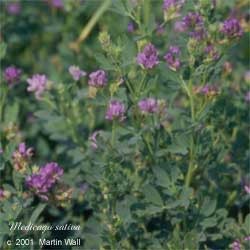 Alfalfa is considered very safe. However, there has been some concern about the safety of eating large amounts of the sprouts, which contain the alkaloid canavanine. Therefore, people with lupus or rheumatoid arthritis are encouraged to avoid eating alfalfa sprouts; the leaves and flowers, however, are safe for consumption. Those taking blood-thinning medication should avoid using alfalfa.

The name alfalfa is derived from the Arabic al-facfacah, "father of all foods." The genus name Medicago refers to ancient Media of western Persia, where this plant is thought to have originated; the genus name could be interpreted to mean "sowed by the Medians." The species name sativa means "cultivated;" it is generally given to plants that have been in cultivation since ancient times. The folk name lucerne, "lamp," makes reference to the plant's bright, shiny seeds. 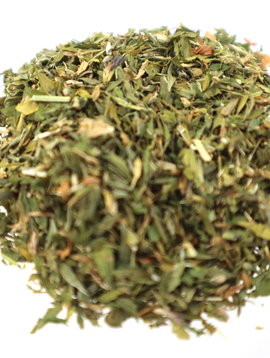