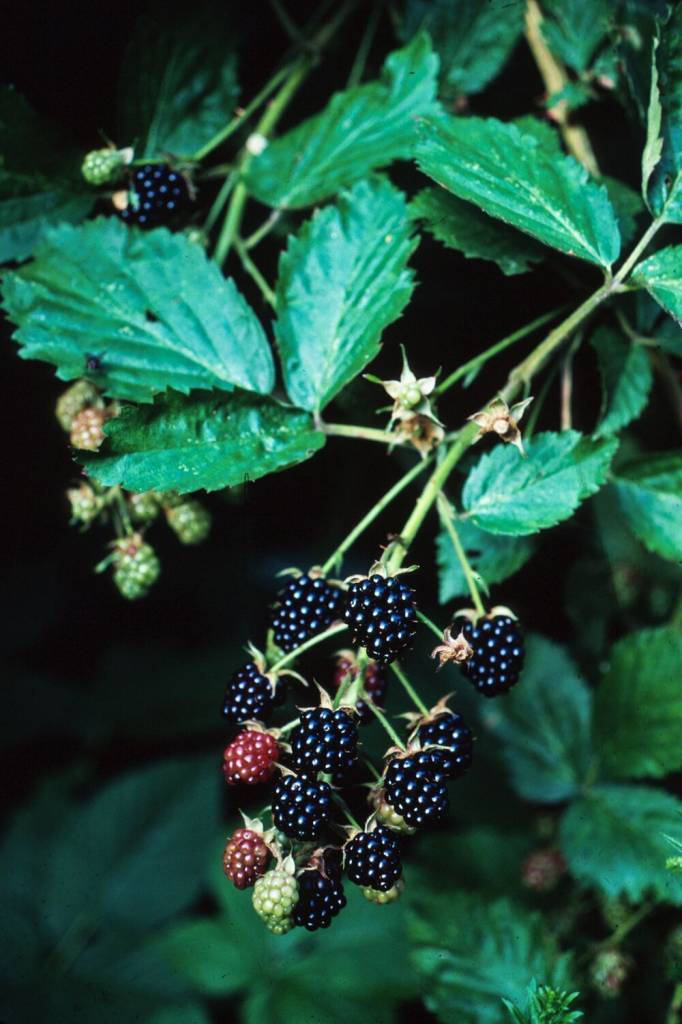 The genus name Rubus is the Latin name for this type of berry plant. The folk name bramble is derived from the Old English word braemel, "prickly."

Blackberry is believed to be native to both Europe and North America. This perennial plant is found most often growing in hedges and open woods. It has woody stems up to 161/2 feet long with large hooks (thorns). The leaves are palmate with three to five rounded, toothed leaflets. The five-petaled flowers can be white or pink.

Blackberries are closely related to raspberries, being in the same genus. They can be differentiated by the fact that blackberries bear larger black or purplish berries and have longer, thornier canes that appear greenish white in their first year. Most herbalists agree that blackberry plants share common uses, as detailed here, and red raspberry plants share their own common uses, as detailed in the profile of raspberry. Blackberry leaf was recommended for therapeutic use, as early as the first century, by Dioscorides. The leaf helps clear heat, reduces inflammation, cools fever, and dries dampness. It is of benefit in cases of anemia, bleeding, cholera, diarrhea, dysentery, fever, gout, hemorrhoids, and infertility. The berries are considered to be a blood-building tonic and are beneficial in cases of anemia. With their antioxidant content, they are also a powerful anticancer and antitumor remedy. They also can be made into a delicious syrup to alleviate diarrhea in children. The root bark is considered to have the strongest medicinal action. It can be used in treatments for diarrhea, dysentery, internal bleeding, and leukorrhea. Topically, blackberry leaf is used as an astringent for oily skin, to treat wounds, as a mouthwash for sores and weak gums, and as a gargle for sore throat. The leaves can be applied as a poultice to relieve the pain and itchiness of insect bites and to shrink hemorrhoids.

The berries are a beloved fruit wherever they are grown. They can be consumed raw or cooked in pies, tarts, and jams. They also can be made into liqueurs, wine, and brandy. The leaf and root bark are not generally considered edible, except as tea. The fruit yields a bluish dye. A fiber obtained from the stem can be used to make twine.

Overindulgence in the berries can cause constipation or diarrhea and can inhibit menstrual bleeding. Those with sensitive stomachs may find the high tannin content of the leaves and root to cause nausea or vomiting.