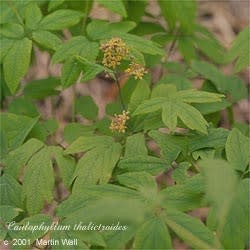 The genus name Caulophyllum derives from the Greek kaulos, "stem," and phullon, "leaf," in reference to the manner in which the plant's stems appear to be continuations of its leaves. The common name cohosh is an Algonquin term meaning "rough with hairs," in reference to the texture of the rhizome.

Blue cohosh, a perennial, grows throughout the United States in open woods, in moist lowlands, near running streams, and in other locations that offer rich soil and shade. The plant has one or more stems with several compound leaves and reaches a height of 1 to 3 feet. It is blue-purple when young and blue-green when mature, while the inconspicuous six-petaled flowers, blooming from mid-spring until early summer, are yellowish green. The globular seeds are blue in color and resemble small grapes.

Blue cohosh was used by several Native American tribes for gynecological concerns. The Fox, Menominee, and Ojibwa peoples used it to relieve menstrual cramps. The Cherokee and Potawatomi used it to facilitate birthing, to bring on overdue labor, and to encourage expelsion of the placenta. The herb was also used as a contraceptive agent. It was widely used by the Eclectic physicians of the late 1800s and 1900s and was included in the United States Pharmacopeia from 1882 till 1905 as a labor stimulant. The herb is known to tonify uterine tissues. When used during delivery it helps stretch the neck of the uterus and increases the strength of labor contractions, making labor easier. In addition, blue cohosh has long been used in treatments for arthritis, bladder irritation, epilepsy, hypertension, hysteria, irregular menses, menstrual cramps, premenstrual tension, rheumatism, and spasms.

The rhizome is not considered edible, aside from use as a tea. The roasted seeds have seen use as a coffee substitute, though they should not be eaten raw as they are mildly toxic.

Use only the dried root, as the fresh plant may cause dermatitis and the berries are toxic. Avoid its use during pregnancy until the onset of labor or until labor is overdue, and then use only under the guidance of a qualified health-care professional. Long-term use or large doses can cause spastic contractions, tachycardia, hypertension, respiratory depression, nausea, vomiting, uncoordination, pupil dilation, and joint pain. As blue cohosh can increase blood supply to the pelvis, it should not be used in cases of heavy menstrual bleeding.