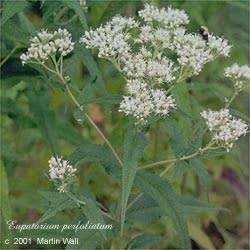 Preparations & Dosage: put 2 tsps of the dried leaves in a cup of boiling water, steep 15 minutes. This should be drunk 3 x's a day. Tincture: take 5-10 ml of the tincture 3 x's a day.

The name boneset comes from the time when this plant was used to treat the flu, known as break-bone fever for the bone pain it caused, in the early part of the twentieth century. Eupatorium, the genus name, is derived from that of Mithrades Eupator, a first century Persian king who was also a famed herbalist. The species name perfoliatum refers to the leaves, which appear to be perforated by the stem.

Boneset, a native American perennial, grows in low, moist areas. It has erect hairy stems that reach a height of 2 to 5 feet. Its wrinkled, narrow leaves are marked with yellow resin dots and are united at the base. The flowers have purplish white coloring.

Boneset was a beloved herb of Native Americans, including the Menominee, Iroquois, Creek, and Alabama tribes, who used it for treating fever. The Native Americans shared its use as a flu remedy with the Pilgrims, and the plant was later widely used by Africans and Europeans in the New World. During the Civil War, Confederate soldiers used boneset to treat fevers and also to treat malaria when quinine was in short supply. Boneset was widely used in medical practice through the late nineteenth century, including as a treatment for typhoid and yellow fever. Boneset promotes sweating, thus helping to clear heat and toxins from the body. The sesquiterpene alkaloids in the leaves increase appetite and, in larger amounts, are anthelmintic. Boneset boosts the body's resistance to both bacterial and viral infections, perhaps due to its polysaccharide content, which increases white blood cell production. In vivo studies indicate that the plant exhibits some antitumor activity. It is often used in the treatment of allergic rhinitis, arthritic and rheumatism pain, bronchitis, catarrh, chest colds, coughs, dyspepsia, fever, flu, herpes I and II, tapeworm, and typhoid. Inhaling the vapors is of benefit in cases of catarrh. The cold infusion is tonic and mildly laxative. The warm infusion is more diaphoretic. Topically, boneset tea can be used as a wash to lower fever.

Not generally considered edible, except as tea.

Large doses can cause vomiting, trembling, weakness, drooling, stiffness, and diarrhea. It is best to use boneset for no more than five days in a row.