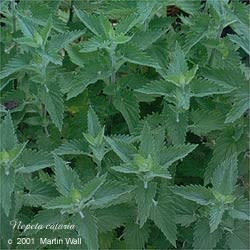 The genus name Nepeta derives from that of Nepeti, a Roman town where this herb was cultivated. The common name catnip refers to the attraction cats have for nipping this plant. Its smell has an effect similar to that of the pheromones that cats secrete, and it seems to affect them as an aphrodisiac and euphoric. About two-thirds of cats respond to catnip by sniffing, drooling, licking, rolling, stretching, rubbing, and so on.

This perennial, native to Eurasia, grows in moist, disturbed sites, such as along roadsides, old buildings, and streambeds. The erect stem is square and hairy. The leaves are grayish green, opposite, oval or heart shaped, strongly toothed, and whitish underneath with a dentate margin. The clusters of white to light pink or purplish dotted flowers grow in terminal clusters. In the garden, catnip is best grown from seed because it tends to draw more attention from neighborhood felines when transplanted. Hence the saying, "If you set it, cats will eat it. If you sow it, cats won't know it."

Catnip contains nepelactones which are both analgesic and sedative and affect the opioid receptor sites of the body. Catnip moves chi, relaxes the nerves, and calms inflammation. This is an excellent children's herb and will help calm them through the trials of teething, colic, and restlessness. When given for colds and fevers, it helps the patient get the rest he or she needs. Early American settlers believed it would make kind people become meaner, and the dried roots were fed to hangmen and executioners. Catnip was entered into the United States Pharmacopoeia from 1842 to 1882 and into the National Formulary from 1916 to 1950. Today, catnip is used to treat amenorrhea, anxiety, bronchitis, chickenpox, colds, colic, convulsions, delayed menses, diarrhea, dyspepsia, fever, flatulence, headache, hives, hyperactivity, hysteria, indigestion, insomnia, measles, menstrual cramps, mental illness, motion sickness, pain, pneumonia, restlessness, scarlet fever, smallpox, stomachache due to nerves, teething pain, toothache, and worms. Topically, catnip can be used as a bath herb to relieve stress, colic, and teething pain or as a compress or poultice to treat pain, sprains, bruises, hemorrhoids, or toothache. It can be used as a hair rinse to relieve scalp irritations and get rid of dandruff, a lotion to treat acne, a liniment to alleviate arthritis or rheumatism symptoms, an enema to cleanse the colon, a salve to soothe hemorrhoids, or an eyewash to relieve inflammation, allergy symptoms, or bloodshot eyes.

Young catnip leaves can be made into pesto or added to sauces or salads. The leaves can also be used as a meat rub for flavoring. Before Chinese tea became popular in the West, catnip tea was a common beverage.

The leaves have been smoked as a euphoric and to stop hiccups. The essential oil is used in perfumery. The dried herb tied up in an old sock makes a great catnip toy for cats; a sachet of dried herb can be placed in bedpillows to help induce sleep. The scent repels rats and many insects.

Large doses of the tea can be emetic. It is not recommended for use during pregnancy