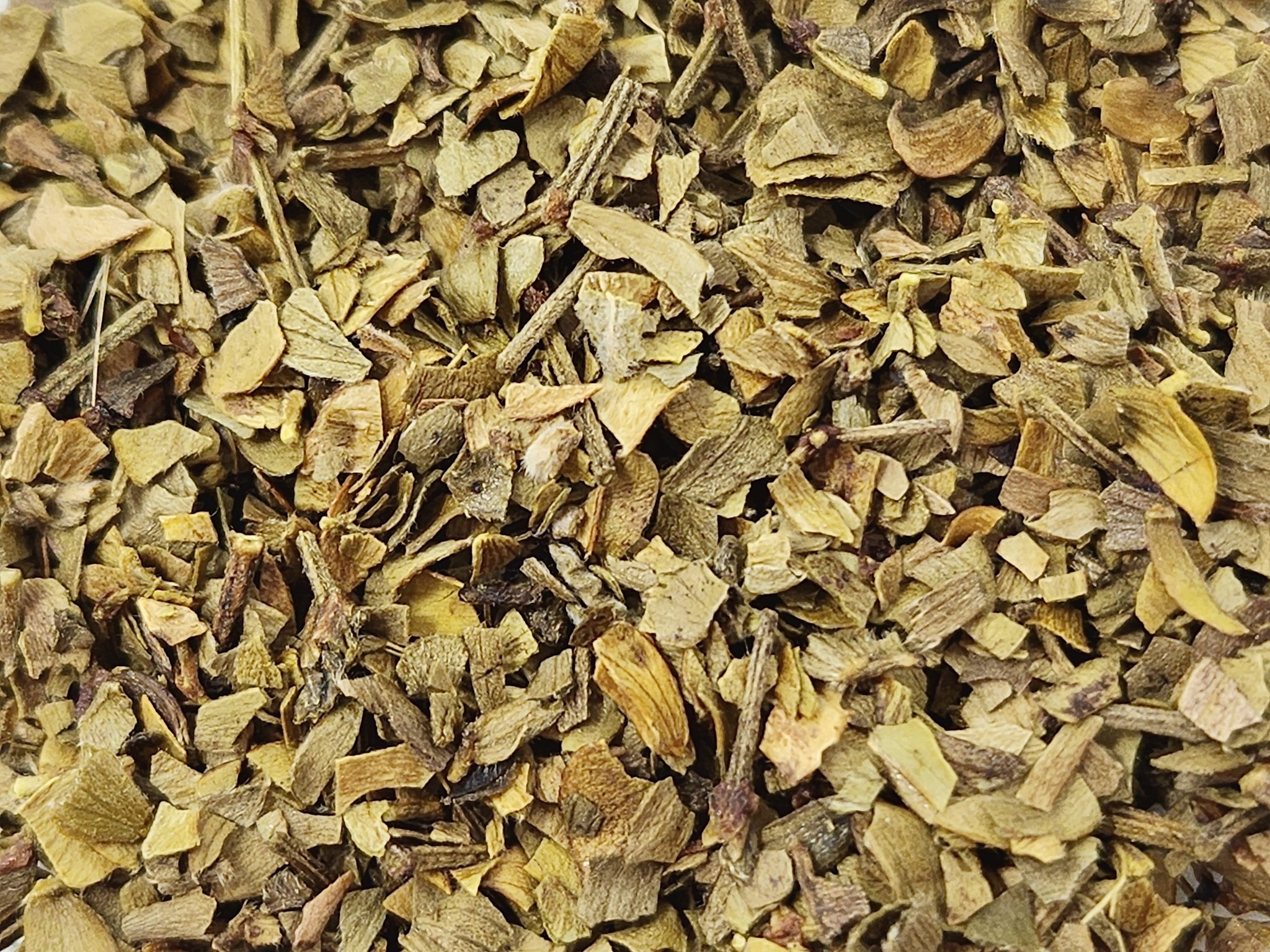 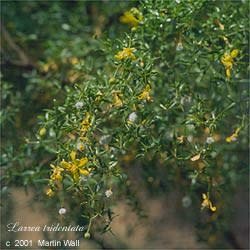 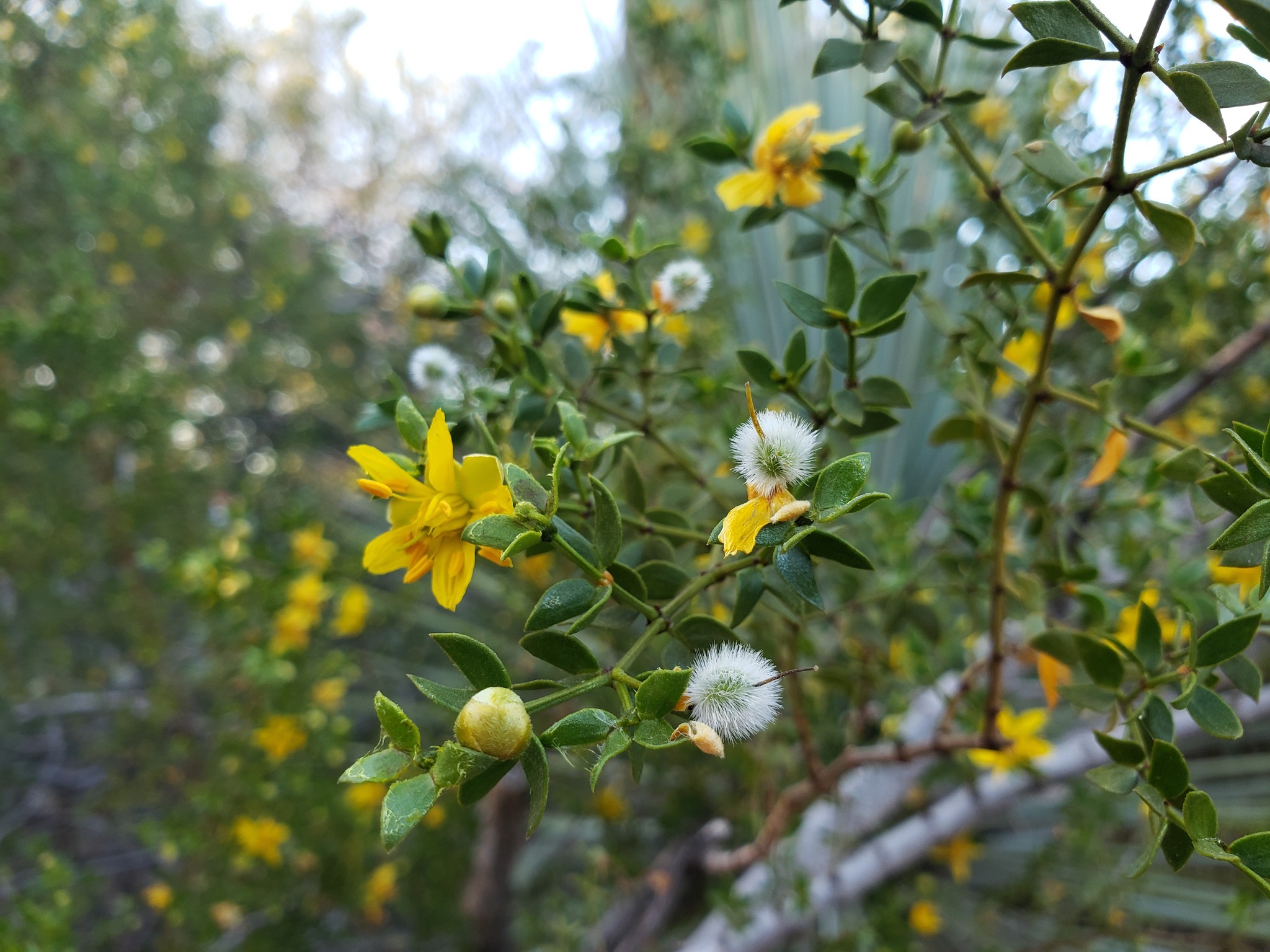 Preparation and dosage: Tincture: take 30 drops, 2-3 x daily. Capsules: take 2 caps, 2 x daily. Tea: blend 1 or 2 teaspoonful of the herb plus 1 teaspoon of cinnamon bark (to kill the nasty flavor) into 1 cup boiling water. Steep 10 minutes or overnight, depending upon the strength desired. Drink 3 x daily. Take for periods of 1 to 3 weeks at a time, taking 3-4 weeks break in between dosing.

The genus name, Larrea, was given in honor of Juan Antonio Hernandez de Larrea, a Spanish clergyman. The common name chaparral derives from the Spanish chaparro, "evergreen oak," which in turn derives from the Basque txapar.

Chaparral is a perennial evergreen shrub, 2 to 9 feet tall, growing throughout northern Mexico and the American Southwest. The smooth, olive green leaves exude a strong-smelling resin that is a deterrent to predators. It produces yellow flowers, about 1/2 inch across, that become fluffy white seed heads, much like cotton balls. The plant is very hardy. It survives drought and depleted soil well and often prevents other plants from growing close to it. Its extremely bitter taste prevents animals from grazing upon it, and it does not burn easily. And after a nuclear test bomb was exploded in Yucca Flats, Nevada, in 1962, chaparral was one of the first plants to grow back, with twenty of the original twenty-one plants in the area resprouting.

Many Native Americans considered chaparral to be a cure-all. It was listed in the United States Pharmacopoeia from 1842 to 1942 as an expectorant and bronchial antiseptic. It cleanses the lower bowels and promotes tissue repair. It stimulates immunity by stimulating mitochondrial respiration, the process in which cells utilize food for energy. It also increases the levels of ascorbic acid (vitamin C) in the adrenal glands, one of the body's primary storage sites for this vitamin. It has long been used to treat acne, allergies, amenorrhea, arthritis, bronchitis, cancer, chicken pox, cold sores, constipation, eczema, herpes, kidney infection, leukemia, leukorrhea, melanoma, parasites, pneumonia, rheumatism, staph infection, stomach cancer, strep throat, tuberculosis, tumor, uterine prolapse, venereal disease, warts, and worms. A wonderful massage oil to ease rheumatic limbs can be made by cooking the branches in oil and then straining them out. Chaparral can be used as a mouthwash to prevent cavities, as a hair rinse to get rid of dandruff, as a suppository to treat hemorrhoids, as a bolus to treat vaginal infections, or as a liniment, salve, or compress to treat cuts, bruises, eczema, hemorrhoids, herpes, scabies, snakebite, and warts. It also can be used as a bath herb to promote detoxification.

Chaparral is not generally considered edible, aside from as tea. It was once used as a preservative for oil and food.

The resin from chaparral was once used to mend pottery and waterproof baskets.

In 1992, two people using large doses of chaparral in capsule form developed nonviral hepatitis and three others developed other symptoms of liver toxicity. This led the American Herbal Products Association and the U.S. Food and Drug Administration to issue a press release warning of potential risk from use of chaparral and suggesting that sale of chaparral be suspended. After more research, there was found to be no basis for the warning, and sale of chaparral was reinstated in 1995. There are still some precautions to take, nevertheless. Avoid chaparral during pregnancy and also while nursing. Excess use may be detrimental to the liver, kidneys, and lymphs. Discontinue use in case of fever, nausea, or jaundice (such as when the whites of the eyes become yellow).