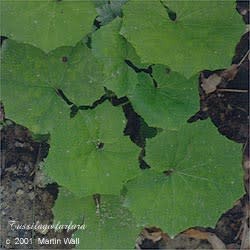 The genus name Tussilago is from the Latin tussis agere, "cough dispeller." The species name, farfara, is thought to be ancient Latin for "to make talkative."

Coltsfoot, a perennial native to Eurasia but widely naturalized, grows in zinc-rich, clayey soils in waste places and along roadsides. It grows from 4 to 12 inches tall. Its downy, grayish stems are covered with leaves resembling scales. The flowers are yellow and terminal. The leaves appear after the flowers and are large, basal, and cordate, with a serrated edge and a shape like a horse's footprint. Their underside is whitish and downy.

The leaf is used primarily in Western herbalism, while the flower is used more in Asian medicine. Both have approximately the same effects and are used mainly as a cough remedy. Coltsfoot prevents blood platelet aggregation, suppresses the triggering of bronchial spasms, dilates the bronchioles, clears heat, curbs infection, and promotes tissue repair. It is used to treat asthma, bronchitis, colds, cough, diarrhea, emphysema, flu, gastritis, hoarseness, laryngitis, shortness of breath, tuberculosis, wheezing, and whooping cough. Coltsfoot is a common ingredient in cough syrups; the flowers can be soaked in honey to make a cough-relieving honey. Topically, the leaf can be used as a poultice to treat insect bites, puffy eyes, sore feet, and wounds. As a facial toner or steam, the leaf has antiseptic and oil-reducing properties and is used to curb blemishes. The flower can be prepared as a soothing eyewash or as a hair rinse to treat dandruff. Coltsfoot has been recommended as a medicinal smoke since the days of Dioscorides. It is even currently marketed in China as a remedy for smoker's cough.

The fresh buds, flowers, and stems can be eaten raw or cooked. The leaves are edible but somewhat bitter; they are best when cooked in two changes of water. The mature leaves also can be dried, burned, and used as a salt substitute. The root can be cooked like a vegetable. The flowers are used in wine making.

Coltsfoot was introduced to North America soon after Europeans discovered the continent. Some Native American tribes came to consider the young, still-rolled-up leaves such an important salt substitute that they fought wars over it. In Scotland, coltsfoot has been used to stuff mattresses. The leaves have been used as an herbal wrap for covering and protecting food. Coltsfoot is also added to animal fodder to relieve coughs in cattle and horses. Goldfinches line their nests with the soft fuzz from the leaves.

The pyrrolizidine alkaloids have been shown to have hepatotoxicity, with the potential for causing obstructive liver damage, when fed to rats. Swedish research, however, shows that these alkaloids are inactivated when subjected to heat, such as when the herb is boiled to make a tea, nor have the alkaloids been found harmful in humans. Nevertheless, to be safe, avoid coltsfoot in cases of liver disease or a history of alcohol abuse. And until further research is done, it would be wise not to use coltsfoot during pregnancy, while nursing, or continuously for longer than six weeks.