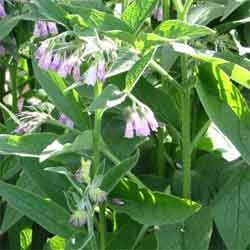 The name comfrey is derived from the Latin con ferva, "with strength." The genus name, Symphytum, derives from the Greek symphytis, "grown together," and phyton, "plant."

Comfrey, a native of Europe and northern Asia, is a perennial that grows from 1 to 4 feet tall on an angular stem. It has large lanceolate or oval leaves which are about 12 inches long with a protruding midvein. The leaves get smaller as they get higher up the stem. Both the leaves and the stems are bristly. The bellshaped flowers grow in curled clusters and can be whitish, pink, or purplish. Comfrey is found growing in the wild in open woods, along streams, and in meadows. Once planted in a garden comfrey tends to take over and can be difficult to eradicate.

Comfrey baths were once given to women before marriage to restore the hymen and thus "virginity." The roots were once used as a dye plant, and the plant has long been used as animal fodder. When added to the compost bin comfrey accelerates the breakdown of organic matter.

Comfrey is recommended only for short-term use of less than six weeks, and it is not recommended for use during pregnancy or while nursing. Some of its alkaloids are pyrrolizidine alkaloids, which may cause hepatic toxicity, specifically hepatic venoocclusive disease, in which the small and medium veins in the liver become obstructed.

The root contains more of these potentially dangerous alkaloids than the leaves, and young leaves contain more than mature leaves. Prickly comfrey (S. asperum) has the highest levels of pyrrolizidine alkaloids of all species, while S. officinale has the lowest. Herbalists debate about the safety of using herbs containing pyrrolizidine alkaloids, and more research needs to be conducted to determine whether comfrey is safe for internal use.

But there is no problem with using it topically as long as the wound is not a deep puncture wound. Because comfrey causes rapid wound healing, make sure a wound is clean of any dirt before applying comfrey. Also be sure of your species; poisonings have occurred from novices collecting toxic foxglove, mistaking it for comfrey.