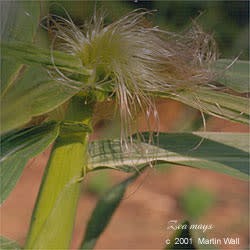 The genus name Zea is Latin for "cause of life." The species name mays derives from mahiz, "mother," the name given the plant by the Taino people of the northern Antilles. The common name Corn derives from the Old English kurnam, "small seed."

Corn silk is not generally considered edible, aside from as a tea. The grain of corn, however, was such an important food to the early Native Americans that ceremonies were held to honor the Corn Mother as a deity. Some tribes referred to corn as "giver of life." Today corn is still a popular grain; it is eaten on its own and is used to make corn oil, cornmeal, polenta, popcorn, corn syrup, and a multitude of other food products.