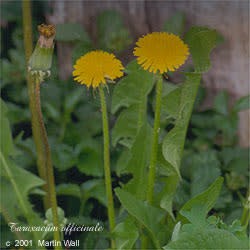 Dandelion is considered one of the five most nutritious vegetables on Earth. The young leaves, gathered before the flower stalk achieves full height and the flowers have not yet formed, may be eaten raw, used as a potherb, or juiced. The young flowers, with the green sepals removed, have a sweet, honeylike flavor and can be eaten raw. The root can be cleaned and prepared like carrots or pickled. The roots are sometimes roasted and used as a coffee substitute. Dandelion wine and beer are most enjoyable.