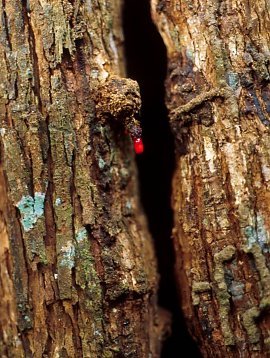 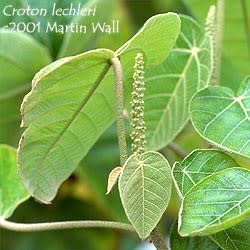 Dragon's Blood, as known in commerce, has several origins, the substance so named being contributed by widely differing species. Probably the best known is that from Sumatra. Daemomorops Draco formerly known as Calamus Draco, was transferred with many others of the species to Daemomorops, the chief distinguishing mark being the placing of the flowers along the branches instead of their being gathered into catkins, as in those remaining under Calamus.

The long, slender stems of the genus are flexible, and the older trees develop climbing propensities. The leaves have prickly stalks which often grow into long tails and the bark is provided with many hundreds of flattened spines. The berries are about the size of a cherry, and pointed.

When ripe they are covered with a reddish, resinous substance which is separated in several ways, the most satisfactory being by steaming, or by shaking or rubbing in coarse, canvas bags. An inferior kind is obtained by boiling the fruits to obtain a decoction after they have undergone the second process. The product may come to market in beads, joined as if forming a necklace, and covered with leaves (Tear Dragon's Blood), or in small, round sticks about 18 inches long, packed in leaves and strips of cane. Other varieties are found in irregular lumps, or in a reddish powder. They are known as lump, stick, reed, tear, or saucer Dragon's Blood. Uses: It is used as a colouring matter for varnishes, tooth-pastes, tinctures, plasters, for dyeing horn to imitate tortoiseshell, etc. It is very brittle, and breaks with an irregular, resinous fracture, is bright red and glossy inside, and darker red sometimes powdered with crimson, externally. Small, thin pieces are transparent.

Dragon's Blood is soluble in alcohol. It fuses by heat. The solution will stain marble a deep red, penetrating in proportion to the heat of the stone.

Medicinal Action and Uses---Doses of 10 to 30 grains were formerly given as an astringent in diarrhoea, etc., but officially it is never at present used internally, being regarded as inert. The following treatment is said to have cured cases of severe syphilis. Mix 2 drachms of Dragon's Blood, 2 drachms of colocynth, 1/2 oz. of gamboge in a mortar, and add 3 gills of boiling water. Stir for an hour, while keeping hot. Allow to cool, and add while stirring a mixture of 2 OZ. each of sweet spirits of nitre and copaiba balsam. Dosage---1/2 oz. for catharsis, followed by 1 drachm two or three times a day.