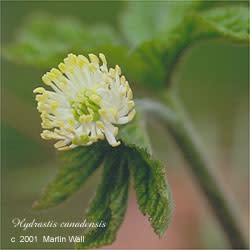 Available in either a 2 oz bag or a pound size. Save 20% when you purchase a pound.

Goldenseal is a perennial herb in the Buttercup family native to Canada and the eastern United States. Hydrastis canadensis is distinguished by its yellow roots. It has a history of beneficial uses by indigenous North American populations and later came into prominence among settlers in the 1800’s. The plant has remained popular, and threats from over-harvest and habitat loss have placed Goldenseal on United Plant Savers’ “at risk” list. Therefore, our Organic Goldenseal root is carefully cultivated for quality and sustainability. Typical preparations of the root include extracts, infusions, and topical balms.

The genus name Hydrastis is from the Greek hydrastina, "water acting," in reference to the drying effect Goldenseal has upon the body's mucous membranes. It is called Goldenseal because of the appearance of seals (like those used with sealing wax) on the root, which are the result of the stalk dying down.

Many Native American tribes used Goldenseal as an ingredient in face paint, to dye clothing, and to repel insects.