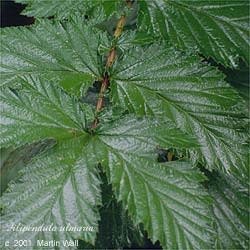 The genus name Filipendula derives from the Latin "filum", meaning "thread," and "pendulum", meaning "hanging," in reference to the threads that connect the roots. The species name, ulmaria, refers to the resemblance of this species' leaves to those of the Elm tree (Ulmus), which are wrinkled on top. The common name Meadowsweet refers to this herb's use in mead making.

Meadowsweet flowers can be eaten raw or cooked. They impart an Almond fragrance to preparations they are used in, such as jam, stewed fruit, and wine. The leaves are often added to soups. The Shakers used this herb in beer brewing, as its natural sweetness enabled them to use less sugar.

The entire aboveground plant was used as a strewing herb during the time of Elizabeth I. The oil from the flower buds is used in perfume. The flowers themselves were once soaked in rainwater to create complexion water and are sometimes included in potpourri. They have also seen occasional use as paintbrushes for large surfaces. The root is used to dye wool black. In folkloric traditions, Meadowsweet is said to promote happiness and to be a useful tool for divination.