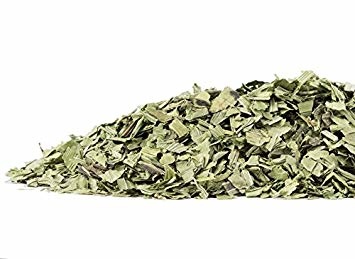 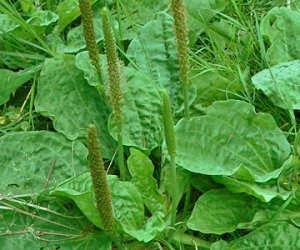 The genus name Plantago, from which the common name Plantain derives, is an old French adaptation of the Latin word "planta", meaning "sole of the foot," in reference to the plant's broad leaves.

Plantain is a low-growing perennial widely naturalized in North America; it can be found growing everywhere from roadsides to lawns and even between the cracks in sidewalks. The five to seven leaves grow in a basal rosette and are ovate and somewhat toothed, with strong parallel fibers. P. major has broad leaves, P. lanceolata has narrow leaves, and P. media has leaves somewhere between the widths of the other two; P. asiatica is taller and wider than the other three species. The inconspicuous flowers are borne on a cylindrical spike that can be up to 15 inches tall. Later this spike becomes filled with numerous seeds. In the garden, Plantain prefers full sun to partial shade and moist soil.

The young leaves are edible raw or cooked and have a pleasant "green" flavor; older leaves are also edible but should have their fibrous strands removed. The seeds are also edible; they are usually ground and used as a seasoning or thickener.

A fiber obtained from the plant is sometimes used in making fabric.