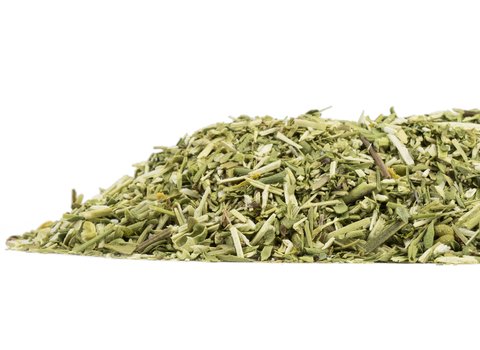 Rue has a long history of use in both medicine and magick, and is considered a protective herb in both disciplines. The hardy evergreen shrub is mentioned by writers from Pliny to Shakespeare and beyond, as an herb of remembrance, of warding and of healing. Early physicians considered rue an excellent protection against plagues and pestilence, and used it to ward off poisons and fleas. A Modern Herbal refers to the plant's 'disagreeable odour and flavour', but in truth, the bitterness of the leaves is only evident in large doses. In smaller amounts, it imparts a pleasant, musky flavor to cream cheeses and light meats. Rue was once believed to improve the eyesight and creativity, and no less personages than Michelangelo and Leonardo Da Vinci regularly ate the small, trefoil leaves to increase their own. The legend of rue lives on in playing cards, where the symbol for the suit of clubs is said to be modeled on a leaf of rue. There are concerns that rue is poisonous and can cause violent gastric reactions when taken in large doses. In addition, some people are highly sensitive to the plant's oils and can develop a severe rash when they are exposed to it and then the sun.

As a tincture, tea and seldom in capsules. Can also be made into a wash.

While rue has been used for centuries for both culinary and medicinal purposes, as well as in general use as a strewn herb to discourage pests, many modern herbalists suggest that it should not be taken internally. Despite this concern, small amounts of rue are often used in salads, egg dishes and cheeses in Mediterranean countries. It is one of the most well-known of the magickal protective herbs and is often used in spells of warding and protection in modern magic.

Specific: Not for use in pregnancy except under the supervision of a qualified healthcare practitioner. Rue contains furanocoumarin compounds; avoid prolonged exposure to sunlight after ingestion.

The common name rue and the genus name Ruta derive from the Greek reuo, "to set free," in reference to the use of the plant to make one free of disease. The species name, graveolens, is Latin for "heavy scented." Branches of rue have been used to sprinkle holy water before High Masses, hence the common name herb of grace.

The common name rue and the genus name Ruta derive from the Greek reuo, "to set free," in reference to the use of the plant to make one free of disease. The species name, graveolens, is Latin for "heavy scented." Branches of rue have been used to sprinkle holy water before High Masses, hence the common name herb of grace.

In ancient Greece rue was an ingredient in mithridate, an antidote to a wide range of poisons. During the Middle Ages it was considered to protect one against evil; later, in the fourteenth century, it was an ingredient in Four Thieves Vinegar, a brew thought to prevent bubonic plague. Painters, engravers, and sculptors of the Renaissance, including Michelangelo and da Vinci, ate rue in the belief it would improve their vision. Today, rue is known to increase circulation to the uterus, lungs, intestines, and stomach and to calm the nerves, ease spasms, and reduce pain. It is used to treat amenorrhea, Bell's palsy, colic, coughs (spasmodic), delayed labor, earache, epilepsy, headache, hypertension, hysteria, menstrual cramps, and multiple sclerosis. It is also used to get rid of parasites. Thanks to its rutin content, rue can be used topically to strengthen weak capillaries. It can be prepared as an eyewash to soothe tired eyes or as a compress or poultice to treat gout, headache, joint soreness, sciatica, tendonitis, and wounds. It also can be prepared as a gargle to relieve sore throat, as a douche to treat leukorrhea, or as an oil to treat ear infection (as ear drops) or rheumatism (as a massage oil). The fresh leaves can be applied to the head as a headache remedy.

Rue is edible but should not be ingested in large amounts. It has a bitter, pungent flavor and has been used as a seasoning since ancient Roman times. It is an ingredient in grappa con ruta, vermouth, and other alcoholic beverages.

Rue was a strewing herb during the Middle Ages, partly due to its ability to repel insects. Its essential oil is sometimes used in the manufacture of perfume, soaps, and lotions.

Use rue only in small doses, and take no more than one dose daily. Do not take immediately after a meal, as it may have an emetic effect. Large doses may cause photosensitivity. Avoid during pregnancy, while nursing, or in conjunction with blood-thinning medications. Although rue has abortifaciant properties it is not recommended for them, as it can be very toxic and can cause vomiting, violent pain, and cerebral disturbances. The sap of the stem may cause contact dermatitis. Do not confuse this plant with garden rue (Galega officinalis), which is a different plant in a different family.