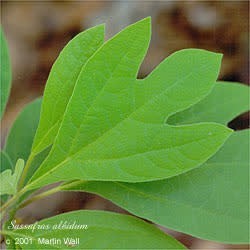 The origin of the name Sassafras is hazy. It is thought to have been given by Nicolas Monardes, a sixteenth-century Spanish botanist, as a corruption of "saxifraga", the name of another genus of plants; there may have been an American Indian name for Sassafras that sounded like "saxafraga" and contributed to the alteration. The species name albidum derives from the Latin "alba", meaning "white."

Sassafras, native to eastern North America, usually grows as a small deciduous shrub, though it can reach a height of 100 feet. It has a dark brown bark. Small, fragrant, greenish yellow flowers appear in clusters before the leaves. The leaves are alternate, bright green on top and downy below, and from 4 to 6 inches long; they are often three lobed and mitten shaped. A small blue-black oval fruit, containing one seed the size of a pea, is widely eaten by birds. The root is a lovely orangish brown. The plant has a spicy orange-vanilla fragrance. Sassafras thrives in deciduous woodlands with moist, well-drained soil and partial shade.

Sassafras tea has long been a popular beverage; during the Civil War, when black tea imports were cut off, sassafras was among the most popular replacements. Its most famous use is as a flavoring for root beer. It also can be used to improve the flavor of other teas and medicines. The winter buds, young leaf tips, and flowers can be eaten raw or cooked. The leaves are flavorful and have a thickening effect. Dried and powdered, they are used in Cajun cooking and to make the Cajun spice blend gumbo file.

The essential oil of the root bark is sometimes added as an aromatic or flavoring agent to soaps, toothpastes, mouthwashes, gums, beers, and perfumes.