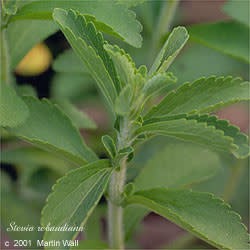 Stevia takes its genus and common name from that of the fourteenth-century Spanish botanist P. J. Esteve. The origin of its species name is unknown.

Stevia is an annual and sometimes perennial shrub native to Brazil and Paraguay but cultivated in highland tropics elsewhere. It grows to about 3 feet in height. Its leaves are opposite and toothed, born on a wand-like, hairy stem. The flowers are white, hermaphroditic, and tubular. The plant prefers moist soil, a humid climate, and plenty of sunshine. 87

Stevia has been used as a natural sweetener for centuries in South America, especially by the Guarani Indians. Stevia leaf is about thirty times sweeter than sugar, and it has only 1/300th the amount of calories contained in sugar. (One of its glycosides, stevioside, is 150 to 300 times sweeter than sugar). In Japan, Stevia accounts for about 40 percent of the sweetener market. Unlike many chemical sweeteners, Stevia's flavor is stable when heated. Stevia is sometimes used to flavor toothpastes and mouthwashes.