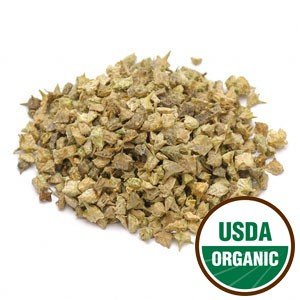 Avoid during pregnancy, except under the guidance of a qualified health-care practitioner. Avoid in cases of dehydration or blood or chi deficiency. In rare cases Tribulus may cause stomach upset, which is diminished by taking the herb with food.

This herbaceous perennial, known by the botanical name of Tribulus terrestris, is found in warm and tropical parts of the world including certain areas in Europe, Asia, Africa and Australia. It goes by the common names of Caltrop, Yellow Vine, due to the yellow flowers it produces, as well as Goathead and Puncturevine for the seeds with sharp spines that the plant produces.

The genus name Tribulus is a Greek term for the word caltrop, a spiky weapon used against cavalry, in reference to the appearance of the plant's fruit.

Tribulus is used in Ayurvedic medicine to enhance mental clarity. Tribulus is native to Africa, Asia, Australia, and Europe but widely naturalized. It is considered an invasive weed in some parts of North America. This low-growing annual or biennial vine requires well-drained soil and full sun but can thrive in drought or desert conditions. It reaches a length of about 3 feet. The oval leaves grow opposite in evenly pinnate compound leaflets, with five to seven pairs. It has purple and yellow hermaphroditic flowers. The fruits are made of four or five segments, each segment resembling a triangular hatchet, and are covered with sharp spines.

The immature fruits (ground into a meal) and young leaves and shoots are edible, though they are usually cooked before being consumed. They are not particularly tasty and are considered an emergency food.