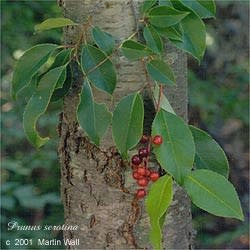 The genus name Prunus derives from the Latin name for plum, prunum. The common name cherry traces back to the ancient Greek name for the fruit, kerasos.

Wild cherry is a deciduous tree, native to North America and Eurasia, that grows up to 10 feet tall. It prefers full sun to partial shade and moist, welldrained soil. The leaves are sharply serrated and range from ovate to obovate. The tree bears white or pinkish hermaphroditic flowers and red to dark purple fruits. Each fruit contains a single large seed (pit).

Wild cherry contains the substances amygdalin and prunasin, which in the body break down into hyrocyanic acid, which, though toxic in large amounts, in small amounts can increase respiration, improve digestion, inhibit the development of cancer cells, and improve mood. Wild cherry also improves circulation, relaxes the nerves, reduces inflammation, and dries up mucus. It relieves the urge to cough, probably thanks to its prunasin content. The inner bark is used in the treatment of asthma, bronchitis, colds, cough, fever, diarrhea, dysentery, dyspepsia (due to nerves), measles, and whooping cough. Some Native American tribes used the bark to relax women in childbirth. To prepare a tea from the bark, simply steep it in hot water, rather than boiling it, to avoid diminishing its essential oil content. Topically, the bark can be prepared as an eyewash to reduce inflammation in the eyes.

The bark is not generally considered edible, aside from as tea. The berry can be eaten raw or cooked and have varying flavors; Prunus avium is the ancestor of many modern cherry varieties. The berry encourages the release of uric acid from the body, thus relieving joint pain and inflammation.

The leaves yield a green dye, while the fruit yield a green to dark gray dye. A dried resin made from the tree bark or the dried blossoms can be burned as an incense. The wood is used in woodworking. In Japanese folklore, tying one strand of one's own hair to a blossoming cherry tree is said to help one find love.

Wild cherry bark is toxic in large doses, so use only in small doses. It may cause drowsiness. Though it helps soothe coughs, it does not address any infection that may be causing the cough. Do not use in cases of severe infection. The seeds (pits) of the fruit should not be consumed unless they have been dried or cooked, as they contain high concentrations of toxic compounds.