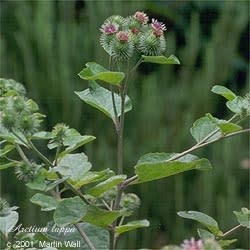 The genus name Arctium derives from the Greek arktos, "bear," a reference to the shaggy burrs. The species name lappa is derived from a Greek word meaning "to seize," in reference to the clinginess of the seeds. The common name burdock is derived from the French beurre, "butter," and the English word dock, meaning leaves; French women would wrap their cakes of butter in leaves of burdock to transport it to the marketplace.

Burdock is a biennial plant that is native to Eurasia but now also grows throughout North America. It thrives in waste areas, by roadsides, and in damp areas. It has large, wavy, heart-shaped leaves and a stem that grows from 3 to 6 feet tall. The flowers are purple globes followed in the fall by burrs with a profusion of hooked prickles. Burdock's taproot is deep, slender, and 10 to 30 inches long, with a dark outer skin; it is ideally collected in the summer or fall of the plant's first year or in the spring of the plant's second year.

During the Industrial Revolution, burdock was used as a medicine to help people cope with pollution or, as John Kelton said in 1870, "the constant deterioration of the blood from impure air and exhaustion by day, bad ventilation at night, and want of attention to ordinary requirements of life." As an anti-inflammatory demulcent agent, burdock root soothes and clears internal heat. It improves the elimination of metabolic wastes through the liver, lymphs, large intestines, lungs, kidneys, and skin. Japanese research indicates that burdock root contains desmutagens, substances that deactivate cancer-causing agents. Burdock is used to treat abscesses, acne, anger, boils, cancer, candida, chicken pox, cough (unproductive), cystitis, dandruff, diabetes, eczema, edema, fever, gonorrhea, gout, HIV, hives, hypoglycemia, indigestion, irritability, jaundice, keratosis, lumbago, lymphatic congestion, measles, mumps, obesity, pain, premenstrual syndrome, prostate inflammation, psoriasis, rheumatism, smallpox, sore throat, staph infection, syphilis, tonsillitis, urinary inflammation, and uterine prolapse. It makes an excellent spring detoxification or fasting tea. The juice of the root can be consumed to rid the body of scabies and mites. Topically, burdock root can be used as a bath herb to relieve sore joints and gout. A compress made from the root or leaf can be used to treat boils, bruises, glandular swellings, knee swellings, sprains, and tumors. The leaf can also be bruised and applied topically to eradicate ringworm. The root can be prepared as a hair rinse or oil to prevent dandruff and hair loss and as a facial toner in cases of oily skin.

Young burdock leaves can be cooked in several changes of water and eaten as a potherb, but do not expect them to be delicious. The young stalks (harvested before flowering) may be peeled and eaten raw or cooked as a vegetable. Burdock root can be added to soup, salad, stir-fries, and sukiyaki. The root also can be roasted and used as a coffee substitute.

The Swiss inventor George de Mestral, who invented Velcro, was inspired to his creation by the burdock burrs that stuck to his dog after a walk. The "sticking" mechanism of Velcro is modeled after the profusion of tiny curved hooks on the burrs.

Avoid burdock seeds during the first trimester of pregnancy, during the later stages of measles, and in cases of open sores. And take care to avoid the sharp spines when working with the seeds. If you are collecting in the wild, avoid confusing burdock with rhubarb, which has similar-looking but toxic leaves.