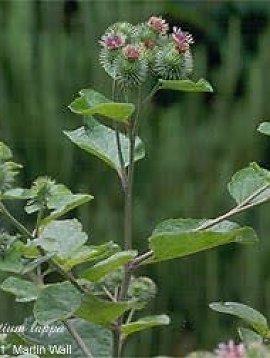 The genus name Arctium derives from the Greek arktos, "bear," a reference to the shaggy burrs. The species name lappa is derived from a Greek word meaning "to seize," in reference to the clinginess of the seeds. The common name Burdock is derived from the French beurre, "butter," and the English word dock, meaning leaves; French women would wrap their cakes of butter in leaves of Burdock to transport it to the marketplace.

Avoid Burdock seeds during the first trimester of pregnancy, during the later stages of measles, and in cases of open sores. And take care to avoid the sharp spines when working with the seeds. If you are collecting in the wild, avoid confusing Burdock with Rhubarb, which has similar-looking but toxic leaves.