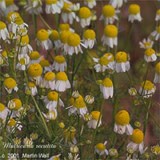 Preparation and dosage: Chamomile Powder: 1 - 3 teaspoons may be blended into a smoothie or taken mixed with honey.
Chamomile Tincture: take 1 teaspoon, 3 x daily.

The German chamomile genus name, Matricaria, is derived from the Latin matrix, "motherly" or "womblike." The species name, recutita, is Latin for "bare of epidermis" or "bounce back." The Roman chamomile genus name, Chamaemelum, and the common name chamomile derive from the Greek khamai melon, "ground apple," as its aroma is applelike. The common name Plant's Physician refers to the fact that chamomile improves the growth of other plants around it.

German chamomile, native to Eurasia, is an annual herb growing from 16 inches to 21/2 feet. The leaves are pinnate and alternate. Its flower has a sweeter taste than the Roman variety. Roman chamomile, native to Europe and northern Africa, is an annual low-growing plant reaching only 8 to 12 inches in height. The leaves are finely divided and doubly pinnate. The flowers of both species are golden conical disks with white florets; they look similar to daisy flowers. Chamomile makes an excellent ground cover; it survives being walked upon. As an old saying goes, "Like a chamomile bed, the more it is trodden, the more it will spread."

Since the times of ancient Greece, both types of chamomile have been used medicinally in the same ways. Chamomile moves chi, relaxes the nerves, reduces inflammation, clears toxins, and promotes tissue repair. In vitro studies indicate that it has activity against E. coli, strep, and staph bacteria. Part of its anti-inflammatory activity may be due to its ability to inhibit the metabolism of arachidonic acid. Chamomile also helps restore an exhausted nervous system; it is an excellent herb for people who complain about every little thing. It is also a beneficial children's herb. Chamomile is used to treat anxiety, arthritis pain, candida, colic, convulsions, crankiness in babies, digestive distress, diverticulitis, dyspepsia, fever, flatulence, gastritis, gout, headache, heartburn, hives, hyperactivity, hysteria, indigestion, insomnia, intestinal cramping, irritability, irritable bowel, itching skin, liver stress, lumbago, menstrual cramps, migraines, morning sickness, nervousness, nightmares, pain, restlessness, rheumatism, sciatica, stress, teething pain, ulcers, and the incessant urge to urinate. Topically, chamomile is used as a bath herb to relieve stress, soften dry skin, and calm cranky children. It can be used as a sitz bath to soothe hemorrhoids. Chamomile is excellent in salves and lotions to treat skin inflammation, including burns, dermatitis, eczema, insect bites, psoriasis, ulcers (external), and healing wounds. It can be used as a gargle to relieve sore throat, as a mouthwash to treat gingivitis, as a poultice to alleviate toothache, and as an eyewash to get rid of conjunctivitis and sties. It can even be used as a douche or enema to reduce inflammation or get rid of infection.

Chamomile flowers are edible raw or cooked. They are often ingredients in various liqueurs such as vermouth and Benedictine.

Chamomile has a wonderful scent; it was used as a strewing herb in medieval Europe and is used even today as an incense and to flavor pipe tobaccos. Its essential oil is added to calming massage blends and cooling spritzers. The herb can be included in shampoo and conditioner formulas to highlight blond hair. Stuffed into bed pillows, it aids sleep. The flower can be rubbed onto the skin to repel insects.

Some people, especially those who are sensitive to ragweed, may be severely allergic to chamomile. It can cause contact dermatitis in some individuals. Roman chamomile is more likely to cause an allergic reaction than the German variety. On the other hand, chamomile is sometimes used to treat allergies. Use the herb with caution the first time you try it. Otherwise, chamomile is considered very safe. Avoid therapeutic dosages during pregnancy.