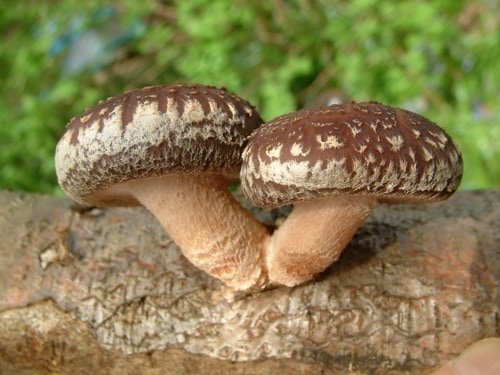 In the 12th century, shiitake mushroom cultivation began in the mountains of central China. Using fallen trees and then wood logs, early cultivators were able to plant spores and help nature produce a larger crop. A fragrant and delicious edible mushroom, shiitake is now the second most popular cultivated mushroom in the world.

In the 1970’s, the Japanese mushroom industry supported extensive research into the nutritional and medicinal properties of shiitake. The scientist Goro Chihara fractionated shiitake polysaccharides and named the most active fraction lentinan, a pure beta-1-3-glucan. This compound was developed into a drug that has been utilized as a complement to traditional medical practices for cancer therapy. Research has also discovered a compound in shiitake, eritadinine, that has lowered cholesterol in some studies.

Proudly Made in China

In 1996, CEO and Founder of Nammex, Jeff Chilton organized organic mushroom production in China. That initiative paid off and today all Nammex mushrooms are grown or wildcrafted deep in the mountains of China by our Certified Organic production partners. Learn more about our growers in China.

Not All Medicinal Mushrooms Products are Created Equal

US lab-grown Shiitake is mycelium grown on grain. Analysis has shown that US Shiitake mycelium on grain has low levels of beta-glucan and very high levels of starch. Nammex only uses 100% organic fruiting bodies which are rigorously tested and guaranteed for active compounds.

The genus name Lentinus derives from the Latin lent, "pliable," and inus, "resembling." The species name edodes is Latin for "edible." The common name shiitake derives from that of the Japanese shii tree (Pasania spp.), logs of which the mushrooms grow on.

Shiitake, native to China, is a light amber fungi with ragged gills. Its stem can be central or off-center. It grows on fallen broadleaved trees such as beech, chestnut, oak, maple, walnut, and mulberry. Kits that allow you to grow your own shiitakes are commonly available.

For thousands of years shiitake mushroom, known as "the mushroom of immortality," has been used to prevent premature aging. Shiitake stimulates the stem cells in the bone marrow to create more B and T cells, inhibits blood platelet aggregation, and aids in the production of interferon. It also helps the body get rid of excessive salt. It is used in the treatment of AIDS, allergies, anemia, arthritis, asthma, bronchitis, cancer, colds, chronic cough, environmental illness, fatigue, flu, hepatitis, high cholesterol, hypertension, rickets, and tumors. One mushroom a day is considered a therapeutic dosage.

Shiitake mushrooms are edible and delicious. They are sold fresh or dried; the stems are often discarded, as they are tougher than the caps.

Shiitakes are considered nontoxic and generally safe. Avoid in cases of extreme weakness or diarrhea. There have been rare reports of allergic reactions affecting the throat, lungs, or skin.